Moving to China – My Experience in China 4

by MariaAbroad | My Experience in China | 2 comments 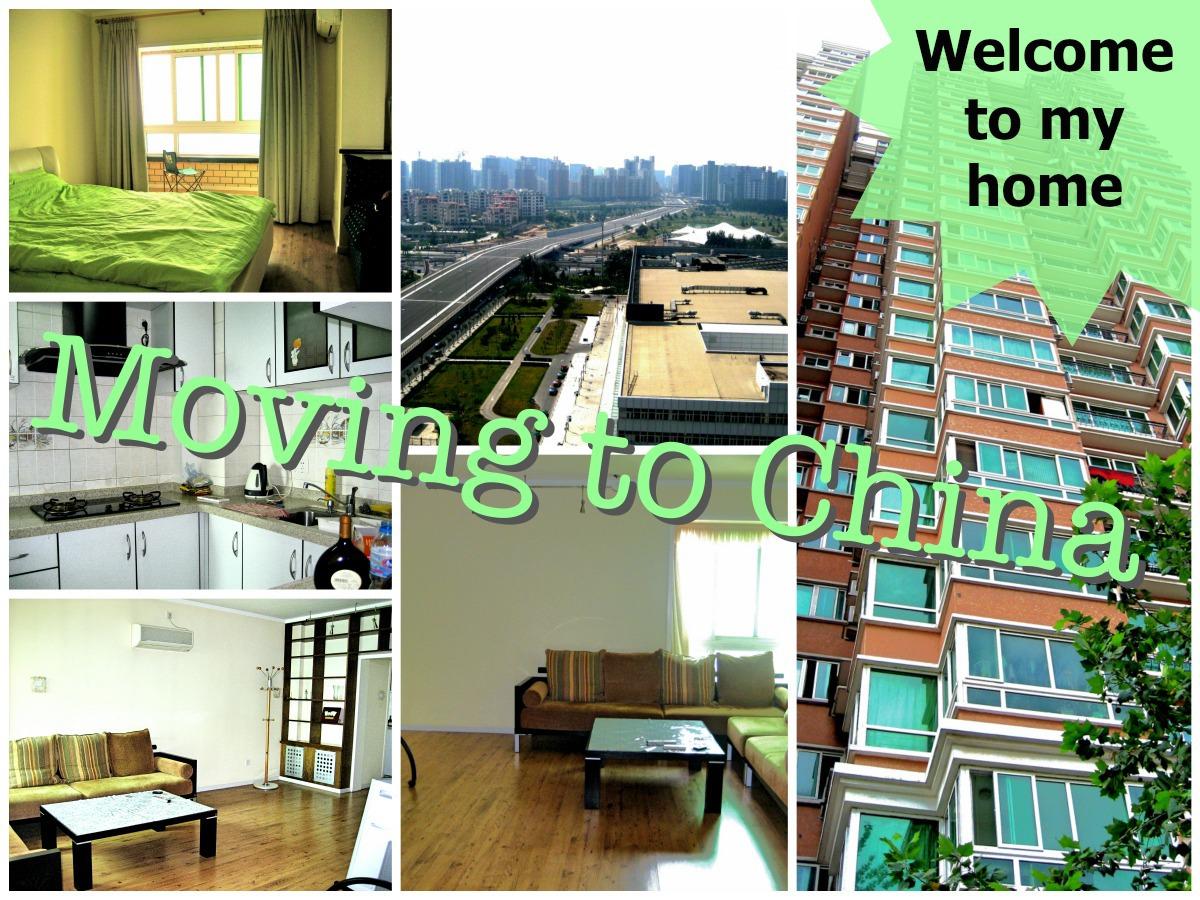 Moving to China – My Experience in China 4

Getting ready for another challenge

Me and my crazy ideas… A few months ago, I could not sleep while I was with my friend in Los Angeles, so as usual, I thought about my future. Even though I am currently studying abroad in San Diego, I thought that another country on my resume would certainly improve my chances of getting a killer job later on in my career.  So I was trying to figure out my next move in life, and because my life is soooo boring anyways, I decided to give it some additional pep by moving to China for a 6 month internship in Beijing. 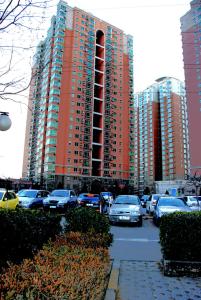 Since I visited China in December 2006, I started to have a real interest in this country in the Far East, or West (from San Diego). I read so many books about China and became fascinated with its tradition, culture and people.  But to really understand a culture, I believe that you have to live in the country and even then, it is a very hard task, due to your own cultural perceptions and value system.  I wanted to give it a shot anyways, so I had the idea that I could move to China.

I have to say that without the help of many of my friends, especially Leila, Bill and Rhea, I could not have done it.  As I was working almost full time at school and taking three directed studies, my schedule was already very packed, so getting ready for my move to the Far East was organized, planned and executed while I was actually supposed to sleep.  I worked full time until August 30, 2007, packed everything the next day into my dirty yellow Ford Escape and moved to Leila’s, Thomas’ and Ponchi’s house.  After two days of partying and getting burned at the beach, Thomas and Leila drove me up to Los Angeles, the place where this crazy idea came into my mind in the first place.  I spend two great days with some family friends and had a great time, as usual when I am up there.  They really make me feel like family, they are so awesome.

Moving to China – Arrival in Beijing

And then, after 5 months of planning, packing and moving, on September 4, 2007 I found myself on an airplane to China – ready to be moving to China.  As it was a lot cheaper, I had booked a flight with JAL and after 11 ½ hours flight from LAX I had a stopover in Tokyo for 1 ½ hours and then another 4 hours to Beijing.  When I arrived in China, I was surprised how much they improved their airport since last December.  Last time I was there, everything was still under construction, but now they are almost done with all the remodeling.  Everything is trimmed to perfection due to the Olympics.  They even did a survey about the customer service of the immigration officers.  They should try that in the US…  This was actually pretty funny, as the survey display had some mysterious Chinese symbols on them and then for the ignorant (= stupid) Westerners: 4 huge smileys, two in red in case the officer was not so nice and two in green for a friendly immigration officer.  Of course, I did not dare to press the red one, as I have heard that Chinese prisons are not that much fun.

After getting without problems through customs and the health check, I was happy to recognize my future boss immediately.  Beforehand I had some worries that I might not find him among hundreds of look-alike Chinese.  Sorry, may be in six months I can figure out a difference, but at first glance, they do look very similar!!!  We met with his personal driver outside and then we drove off to my apartment.  Even though it is in a huge apartment complex with 10 24-stories buildings, my apartment is very spacious and nice from the inside.  A very big advantage is that it is right next to IKEA, so if I ever should feel homesick, I can go and feel right at home, eat smoerebroed and look at my old furniture.  I don’t have to worry about buying any furniture though, because it is completely furnished and David was so nice to supply me with some water and the essentials like toilet paper, instant coffee, and noodle soup.  Exhausted, but happy I went to bed.

Moving to China – My first day at work

When I woke up at 5.30 AM, I started to unpack my suitcases and tried to give the apartment a little personal touch by putting my books and pictures in the huge bookcase in my living room.  During a short break, I discovered that one of my neighbors did not secure his internet, so I have become an internet thief once again!  I chatted with my friends, looked for my email and surfed the net, but then the connection became and still is very unreliable.  Well, it does not really matter, as my boss promised me to set up my connection within a few days.

At around 2.30 PM, the company driver picked me up and drove me to the office. As he does not speak any English, I was happy to see one of my future coworkers in the car as well.  They had drawn me a map of directions from and to my home and the office. We arrived at the office shortly before everybody takes a short break called afternoon tea.  We had popsicles and I was introduced to my other coworkers. Most of them are young women, so when they found out that I don’t speak any Chinese, they grouped together and started giggling.  One can guess what they were talking about, but I am fine with that.  This only encourages me more to get ahead with my Chinese. I am the ignorant Westerner, who is not even able to remember their names, so I guess it is ok if they gossip about me in the beginning. But I will learn and show them, that not all Westerners are alike and that I really want to learn about their culture and traditions. That was one of my main reasons for moving to China in the first place anyway.

Shopping in China – Expired or not expired, that is the question! 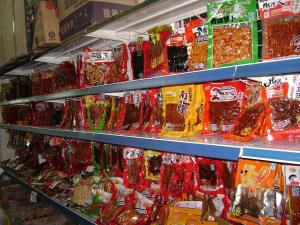 My fellow coworker and I left the office a little bit early, so I could open a bank account, but the waiting line was too long and the driver rushed us out.  At the bank I had my first encounter with the phenomenon “loss of face”, that I had read about so much before moving to China. When I asked my coworker if it is a problem to open a bank account.  She did not know the word account and I didn’t know how to explain it, so she just kept on saying yes.  That was very confusing, because she obviously did not know what I was talking about, but she kept on talking anyways.  Well, I just ignored it and ask David tomorrow.  I hope I did not offend her in any way, because she was very nice to me so far.

We then went to the Carrefour supermarket, the French equivalent of Wal-Mart, or Wally-World, as I like to call it.  This is really was an experience of itself. It is a combination of Farmer’s Market with fresh and alive fishes and birds and a regular supermarket.  My coworker was with me, and I believe she thinks I am kind of strange now.  It was virtually impossible to find anything in this store that was not expired yet.  When I refused to buy orange juice that expired in June 2007, she looked at me like I am some sort of alien or something.  As of right now, I decided to go out to eat because then at least I don’t know what I am eating. I only bought some bread, eggs, coke and water; you cannot go wrong with that I hope.  Then we dropped her off at the office and the driver took me home.

I have to admit, that I was a little bit upset when I got home.  Moving to China had not been as smooth as I had imagined. Especially the experience at the Carrefour made me realize that this is not home and things are not as easy as I am used to.  But however, this is the adventure and challenge I was looking for.  Let’s see where this road is going to take me, I am ready.  China, here I come!!!

UPDATE: As I was kindly informed by Tyler, I am one big ignorant fool. Apparently, the date on the food is unlike in the US or Germany the “Best by” or expiration date, but rather the production date of the product. We’ll I am very grateful for the tip. Thank you Tyler 🙂