Edible Insects – A Push Outside Your Comfort Zone 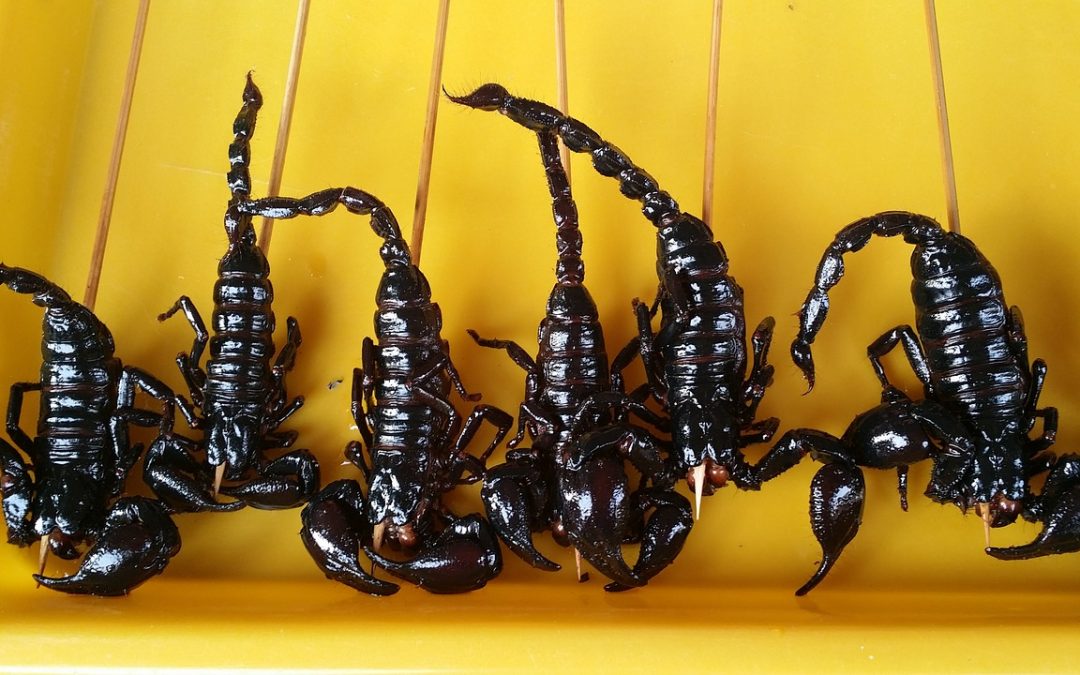 My sister recently sent us some gifts: among them, insects. To be specific, crickets (packaged as “Crick-ettes,” for some strange reason) and worm larvae (packaged as “Larvets”). They were flavored like potato chips: salt and vinegar or cheddar cheese or bacon and cheese. She also sent a couple of lollipops, one with a cricket embedded inside, the other with a scorpion. And one package of chocolate-covered bugs.

My initial reaction was a knee-jerk “Eeeww!”

My son’s reaction was a sardonic “Really?”

Warning: If you have a Shellfish Allergy, be careful when trying insects, as many people are allergic to both

My husband, the only one not completely turned off at the very idea, just laughed at our reactions.

So then I tried a larva: cheese flavored. But actually, also completely flavorless. The chocolate one I tried tasted better, in that it mostly tasted of chocolate, but with a bit of a crunch to it.

My husband ate the rest of the chocolate ones, but we threw away the other boxes. No one wanted them.

These were packaged in tiny amounts; just about six crickets and perhaps two dozen larvae per package. Clearly they’re marketed as novelties, not as food. They’re something to buy in order to dare someone to eat it, which I suspect is why my sister bought them for us. (My sister hasn’t tried them, her excuse being that she’s a vegetarian.)

It’s also healthy: besides protein, edible insects are high in vitamins and minerals. And good for the environment: less land needs to be used and farming insects produces less in the way of waste products or greenhouse gases than any other animals.

So everyone seems to agree that people should eat more insects and less of any other protein.

That’s fine, in theory, but the problem is in practice: people in Europe and North American in particular are, in general, disgusted at the very thought of eating insects.

In Malawi, where I served as a Peace Corps volunteer, insects are definitely on the menu. At particular times, after it rained, winged ants would emerge in large numbers from their nests in the ground. I would find my students crouched in circles around each nest in the wet grass, grabbing these delicacies as they fluttered up and popping them into their mouths alive.

Once, I even had the nerve to try one. It tasted like dust.

Sometimes these winged ants are captured by placing a basket over the nest. Then they’re fried and salted, which makes them somewhat more palatable: like potato chips, but with less flavor.

At the same time as we westerners in Malawi were disgusted by these insects that were such a treat for the locals, the locals were disgusted with us for eating shellfish like shrimp or crabs. Malawians were horrified that anyone would actually eat them.

We think we make independent choices, but it’s alarming how much of our behavior and preferences are culturally determined. Outside of Europe and North America, many cultures eat insects.

My advice for insect producers

If this is ever going to take off in the West, it has to become more than just a novelty item. Here’s my suggestion to any insect producers out there who might be reading this: you need to approach this differently. The insect must not be visible as an insect. Here in Europe or North America, that will always elicit a disgusted response.

Instead, process it into flour. Market it as a high-protein additive to pretty much anything. It could be baked into bread or other baked goods for a high-protein, low carbohydrate version. It could be added to energy or sports drinks or smoothies or yogurts. Figure out how to make a meat substitute with it, like the ones that are available made from soy. Add it to chocolate. The possibilities are endless.

In other words, make it into anything else that’s edible and doesn’t look like insects. That’s the only thing that will eventually overcome our reluctance and even disgust at your product.

Apparently, in the US, this is already happening: insects are being baked into cookies and used in a range of ways, both for human food and animal feed. Yet it still hasn’t taken off; the mere idea of eating insects is too much of a turn-off. You can even buy them on Amazon!

Here in the Netherlands, insect producers are trying to promote the use of insects in these ways too, but any real progress has to wait for the European Union to make some rules. In the meantime, in the absence of clear regulations, insects are sold in very small amounts as novelties, and otherwise only used for things like reptile food and fishing supplies. Once new laws are passed, I suspect that more processed food producers will get involved, since insects will bring their costs down by replacing less efficient forms of protein or fillers.

If it happens, I’m all for it, providing that:

What are your feelings about edible insects? Add a comment below, and don’t forget to tell us where you are from!

Rachel Heller is a travel blogger at Rachel’s Ruminations, where she writes about independent travel with a focus on cultural and historical sights/sites. Raised in the US and educated at Yale, she met her Dutch husband when she served in the Peace Corps in Malawi. Also follow her on Facebook, Instagram, and Twitter.