A Mix of Influences – Discovering Arab Culture in Indonesia 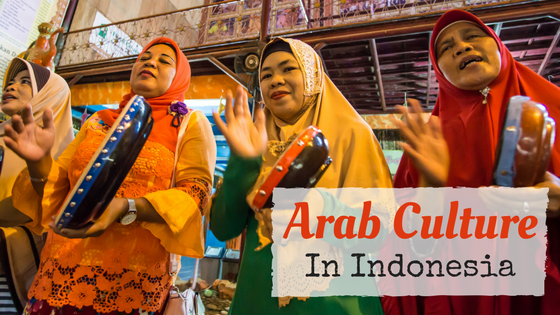 Indonesia is a popular travel destination in Southeast Asia. No, actually, Bali is. While Bali is gorgeous and definitely worth a visit, Indonesia has so much more to offer than just this one island and I wanted to share some of my recent adventures and the various cultures I encountered while I was there.

Indonesia: The archipelago consists of over 17 000 islands and stretches from Singapore to Australia. Indonesia has been influenced by many cultures. Once a hotspot for sought-after spices, it didn’t take long for colonists and spice traders from all over the world to settle there, do business and over time, influence the local culture.

When Marco Polo spent 5 months in Northern Sumatra in 1291, he already reported that the locals in the cities were followers of Muhammad. The influence of Arab culture in Indonesia varies by region. Aceh, where Marco Polo landed, is over 98% Muslim, while Bali is predominantly Hindu. Christians make up the second largest religious group with about 10% of the population and are spread all over Indonesia. What I found very inspiring is the mostly peaceful co-existence of various cultures and beliefs. In most areas of Indonesia, people are very respectful of other religions and behaviors.

However, Islam is an integral part of daily life in Indonesia, especially outside of Bali. When you drive through the cities and villages, you see colorful mosques and the call to prayer will guide you through the day. Many women wear jilbabs and long, conservative clothing and while alcohol is available in touristy areas, hotels, and resorts, Indonesia (again: outside of Bali) is not your typical Southeast Asia Backpacker party destination. Which in itself can be positive or negative depending on what you are looking for in your vacation.

When I was in Palembang, the capital of South Sumatra, I was able to experience the influence of Arab culture in Indonesia first hand. I had just arrived after a 20+ hour plane ride with Singapore Airlines from Los Angeles and needed to kill time before bed, or jet lag would kill me. After checking into my hotel (I stayed at the Santika Hotel), I headed out to see some sights.

The Al-Qur’an Al-Akbar mosque in Palembang honestly does not look like much from the outside. It doesn’t have the bulbous domes and colorful spires that most mosques have. Instead, it is a tall-ish tower hidden behind trees that I certainly would have passed by, had it not been for my local guide. 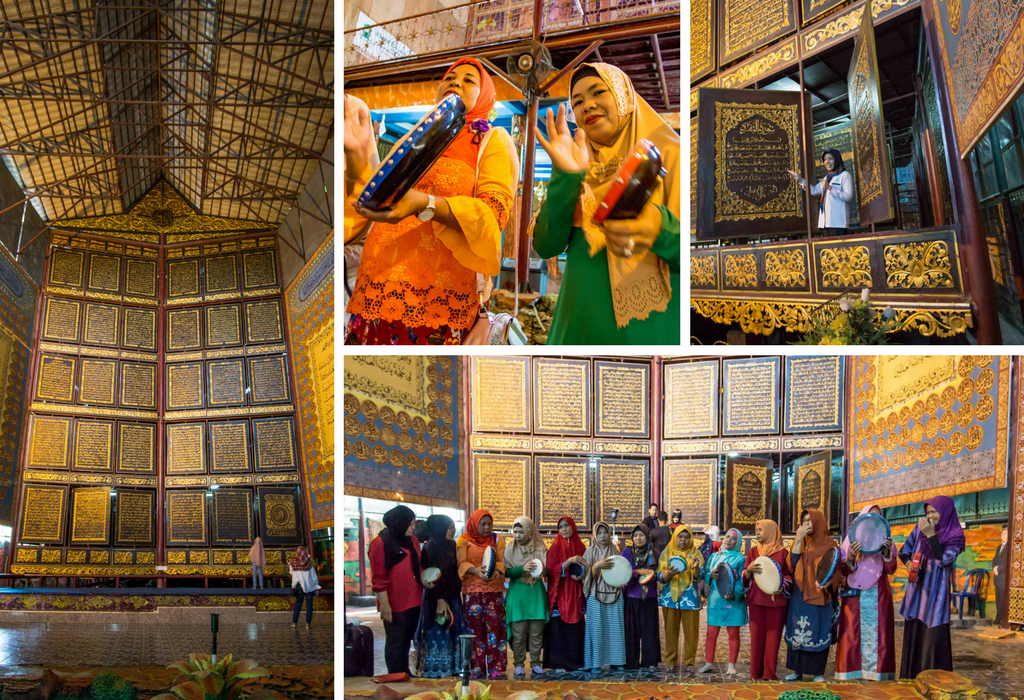 But when I stepped inside, I was awestruck. The Al-Qur’an Al-Akbar mosque features the largest wood-carved Quran in the world. The 630 pages are carved on almost 6 feet tall, black wooden sheets with gold-leaf lettering, filling multiple rows and 5 stories up. Each sheet swivels around a center pole and is covered on both sides with exquisite Arabic carvings sharing the word of Allah. 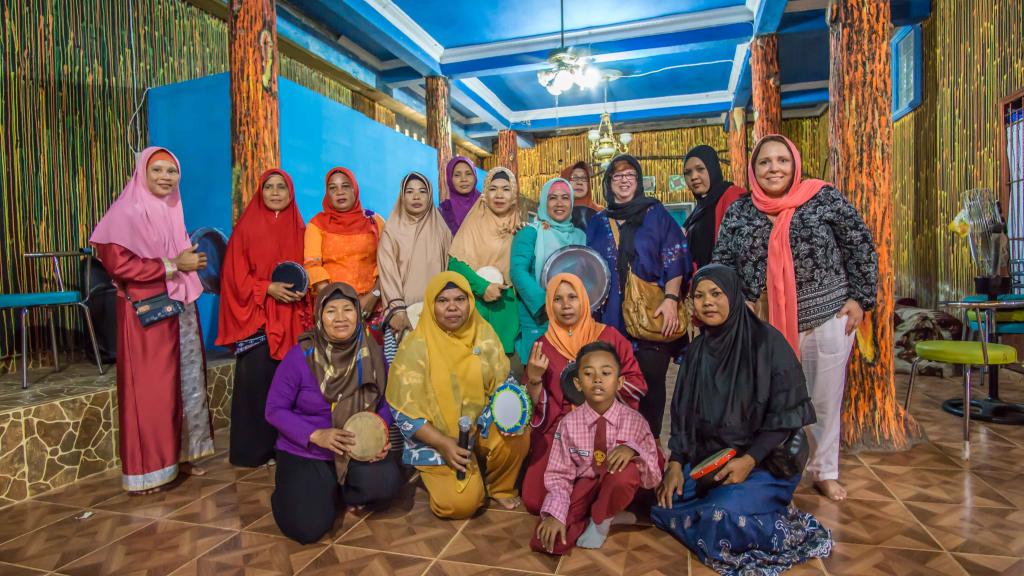 As I was taking photos of the 100 foot tall Quran, I discovered a group of women in the back of the mosque who were having choir practice. I listened to their beautiful voices and drums. During an interlude, I asked my guide if it was ok to take photos of them. Not only were they ok with it, they were not satisfied until they all had taken a selfie with me, as well as several group photos and performed one of their songs. This was such a warm and welcoming experience to Indonesia – completely unplanned and unexpected, but yet one of my favorite memories of my whole trip. 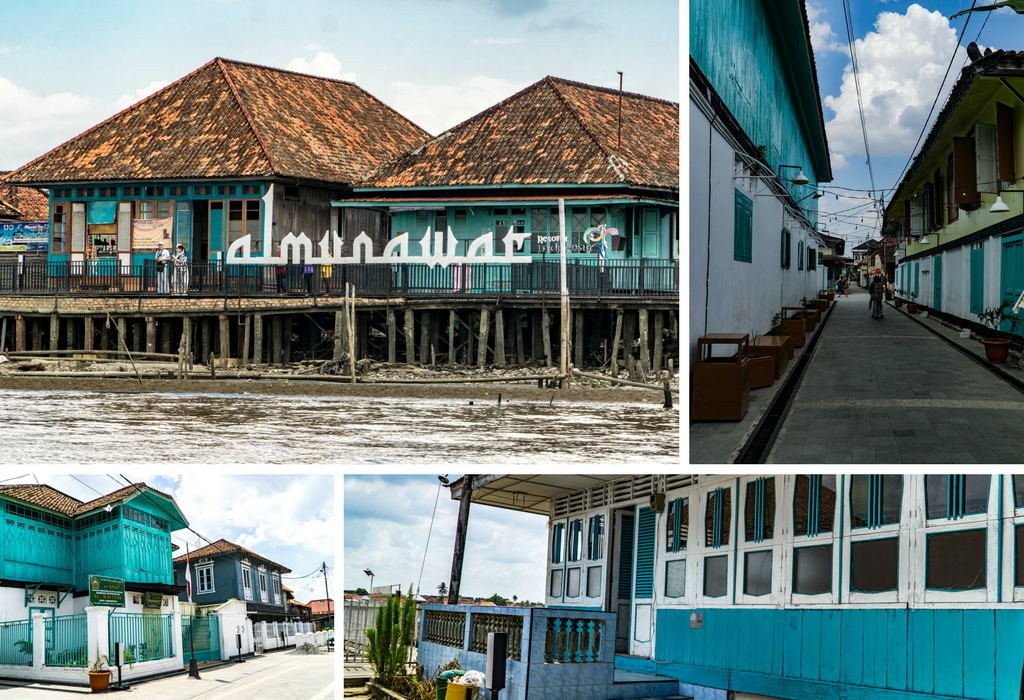 Another incredible experience of Arabic culture in Indonesia was my visit to the Arabic village of Almunawar near Palembang. It is built close to the Musi river that bisects the Indonesian port city in the South. The brightly colored boats and buildings along the river banks look colorful and inviting. Kids play in the water, women do their chores, some are bathing and brushing their teeth. If it weren’t for the speed boats racing by, this scene could have taken place a hundred years ago.

Sharing a Meal with Locals

In this village, women have to cover themselves, even tourists. I wore loose fitting, airy pants, and a light long-sleeved shirt with a light scarf draped over my hair, as I was invited into the home of a local Muslim family for a traditional meal. The local family welcomed me into their home and shared their food with me, my friends and our guide. It was an incredible experience. 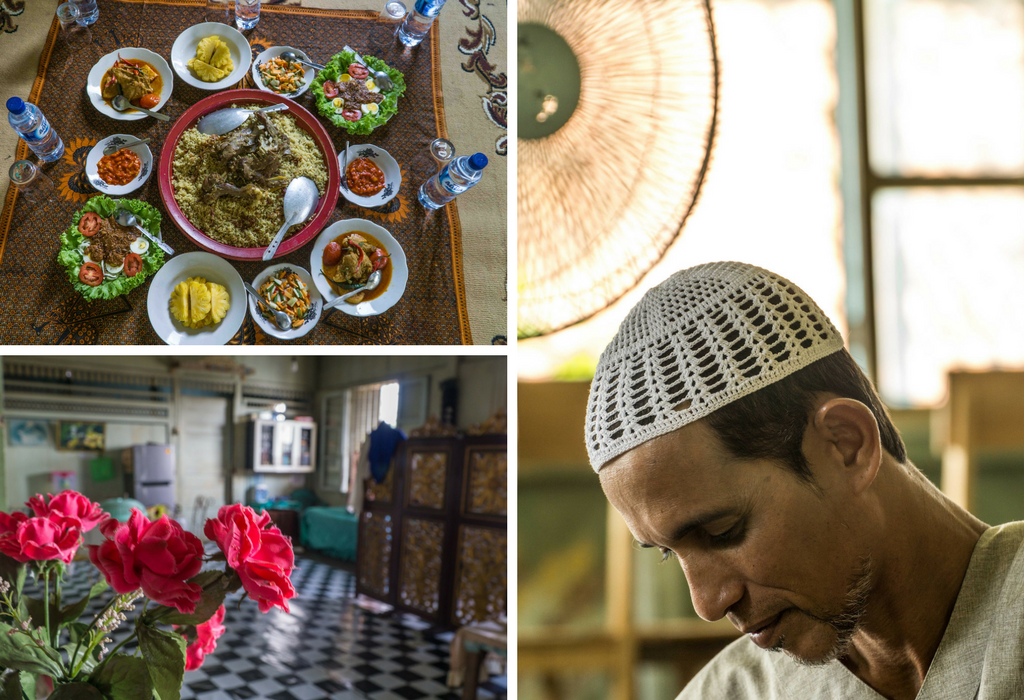 We sat on the carpeted floor and were offered a spread of delectable dishes. Small plates of fish and chicken curry, salads, sauces and pineapple slices surrounded the highlight of the meal: chunks of lamb on a bed of saffron rice.

After we finished our meal, our host showed us his house. His son, maybe 9 or 10 years old, as well as a few of his friends, stuck their heads inside, only to squirm away when I took their photos, giggling shyly from their hiding place on the balcony. My travel companion and proud Texan Debbie coaxed them out by offering them Texas-shaped pins and they quickly warmed up to us afterward. This interaction with a local family, eating the local food and being welcomed with open arms into this family’s home is why I travel. It gave me a glimpse of the Arab culture in Indonesia. 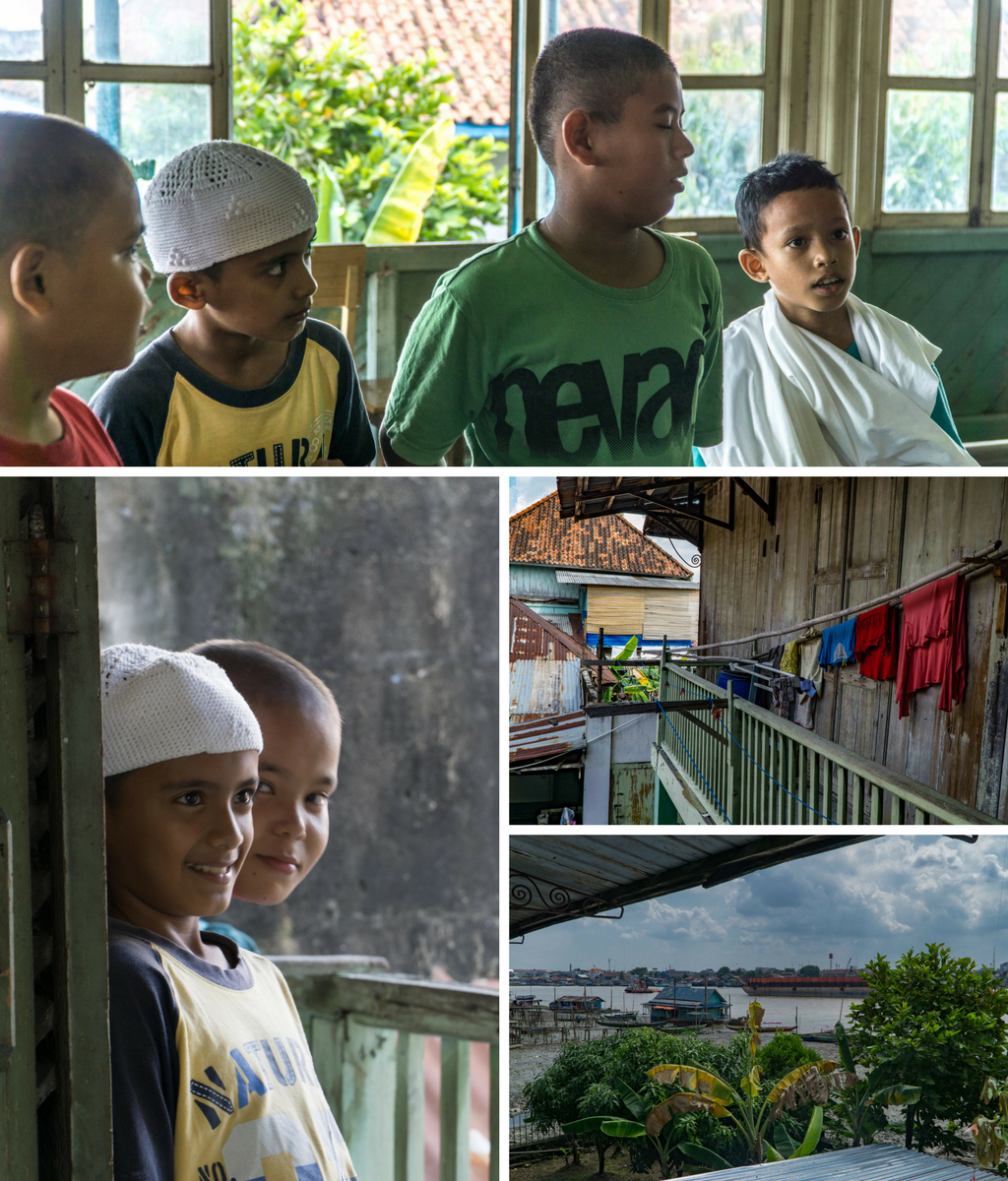 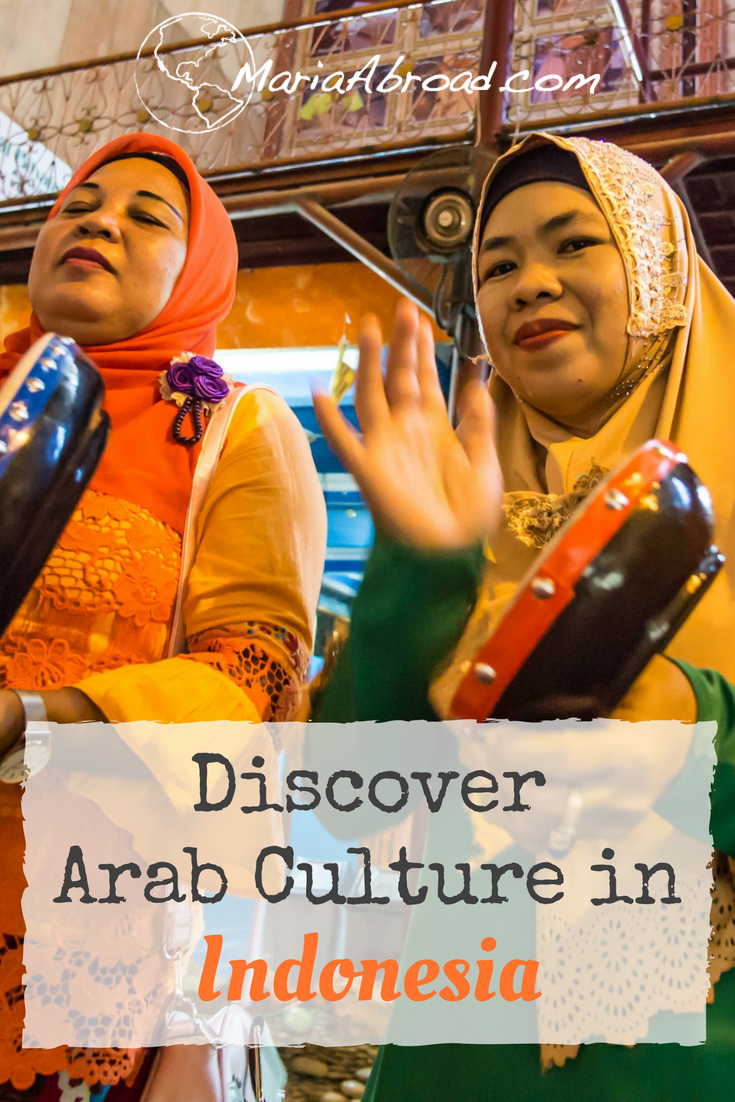 Disclosure: My trip to Indonesia was courtesy of the Indonesian Consulate in Houston, the Indonesian Ministry of Tourism and the local Tourism Boards of South Sumatra and Riau Islands. They organized and sponsored my trip, while Singapore Airlines (read my full Singapore Airlines Review here) graciously covered my flights, however, my opinion on this blog remains my own and I am sharing my experience and adventures in Indonesia as objectively as possible.