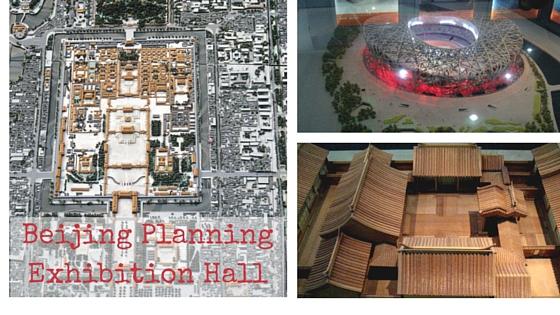 I had visited all the major sights of Beijing on a previous visit, but all of them in 2 days, so yes, I can say I have been at the Great Wall, Tiananmen Square, Forbidden City, Ming Tombs, and the Summer Palace, but have I seen them?  Not really…  So when I returned to Beijing to stay for six months, I decided to explore all the fascinating sights a little more in depth.  I want to see all the sights again, and this time I want to explore them, see all what they have to offer.  Every weekend I pick a spot, which interests me and try to spend the whole day there. So last Saturday, I went to the Beijing Planning Exhibition Hall.

I had visited the Planning Exhibition Hall in Shanghai last year and was really impressed, so when I found out that Beijing has one too, I just had to see it.  I found the address on the internet and the description said it is between the Beijing train station and Tiananmen Square, so I decided to take the subway to the train station and walk towards Tiananmen Square.  Sounded like a good idea, because that way I had to pass the Beijing Planning Exhibition Hall sooner or later and have a nice walk at the same time…  Well, here is what really happened:

Getting to Beijing Planning Exhibition Hall

Saturday, October 20, 2007, 2:03 PM:  Maria buys skewers from street vendor;  first food intake of the day;  Taste:  Awesome;  Origin:  Unknown;  Note to self:  If business career does not take off as planned, become Chinese street vendor and eat all the food myself;

Oh, did I mentioned that I did not have coffee that morning?  Well despite the detours, obstacles, and difficulties, the Beijing Planning Exhibition Hall was great.  It was really interesting and the model of downtown Beijing is just amazing.  It also provides a great deal of information about the future development of Beijing, especially concerning the Olympics and a model of the future development of the CBD (Chinese Business District).  Some of the information is a little bit too rosy, especially about the measures that Beijing is taking to protect the environment, but this is China after all.  The exhibition is very interesting and they even have a 3D and even a 4D presentation.  I saw the 3D movie, which was great and I highly recommend it  All in all I have to say that the Beijing Planning Exhibition Hall is definitely worth a visit and I enjoyed my afternoon there.

Since the day had been a little bit strenuous, I decided to go home and take it slow and get some rest before heading out again.  Sabrina, my friend from Germany met two guys from Norway on the internet and we were to meet them for dinner and a rock concerts of one of their friends later on.  So I picked up Sabrina and off we went to the meeting place of our “Double-blind-date”.  The guys, Simen and Fredrick took us to a fancy Hotpot place and we had a great time.  They both just got to Beijing and are to open a representative office for their Norwegian shipping company.  After dinner, we took a cab to the club.  Even though we had a flyer with a Chinese address, the cab driver had a hard time finding the place.  See, it’s not just me!!!

I really had no idea what to expect from a Norwegian rock band playing in a club in Beijing, but they were really good.  The club was nice, too.  It was dark and gothic and had sort of a Quentin Tarantino feel to it.  Best of all, the Mojitos there were cheap and very good.  After the band stopped playing, we decided to go to famous Suzie Wong’s, the major Expat hangout spot in town.  I did not like it too much, since it is just like any other Western club, so I decided to go home and get my beauty sleep…