A Wedding in China – My China Experience 26

by MariaAbroad | My Experience in China | 4 comments 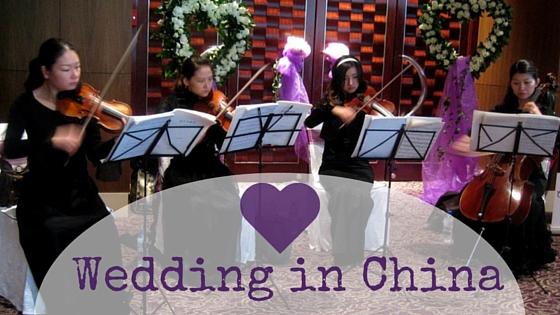 A Wedding in China

My Boss is Getting Married

The weekend after I returned from Malaysia, I had another event I was looking forward to: A Wedding in China.  My Boss, David Fu, was getting married and all the employees were invited.  I was looking forward to it very much, but I was also very concerned that I might make some unforgivable cultural mistakes…  So I interviewed my colleagues about the dos and don’ts of a Chinese wedding.  I am so glad I did, otherwise I am sure I had made some serious faux pas.  I wanted to wear my black suit, as this would have been the most suitable for a German wedding. 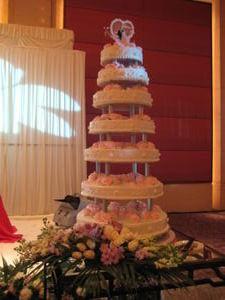 Not so in China!!!  It is ok for men to wear black suits, but not for women, as black symbolizes death, not a nice thought on a wedding day.  Then I found out about the presents.  There are no presents at a Chinese wedding, but you are supposed to either give money in a small red envelope with your name on it, or jewelry.  In the latter case, you are expected to put the receipt with the present, so newlyweds know how much they are worth to you.  I decided to go with the red envelope…

The day of the wedding, I picked up one of my colleagues and we drove downtown to the Regent Hotel.  The wedding took place in the ballroom and the decoration was more Western than Chinese.  There were beautiful bouquets of white orchids on each table, two huge ice swans on the center stage and I have never seen a wedding cake that high. In front of the ballroom, a string quartet was playing classical music and there were beautiful posters of my boss and his soon to be wife.  It was truly romantic and beautiful.

I sat down on the table and chatted with some of my colleagues and suddenly David Fu tipped me on my shoulder and said he had a surprise for me.  When I turned around, my friend Rhea, the wife of my boss in the US and the woman who helped me to organize this internship, stood in front of me.  I was so glad to see her and talk to her about how things were going in San Diego.  Rhea is a great woman; she has so much power and drive.  She is a very successful businesswoman, jetting back and forth between San Diego and Beijing several times a month, has two children and a working marriage.  When you listen to her and learn how many things she manages simultaneously, you will feel nothing but awe.  She really is an inspiring woman and it was a great surprise to see her.

A Wedding in China – The Ceremony

A Wedding in China is a bit different than what I had experienced before in Europe and the US. The ceremony was supposed to start at 11:18 AM, because they got married on November 18, 2007 and the reception took place simultaneously to the wedding ceremony.  Well, I guess that is what most guests want anyways, isn’t it?  First of all, I have to say it was a beautiful, yet very different ceremony.  We sat down and enjoyed some delicious foods, while the bride and groom got married on the center stage.  As Chinese don’t have much religious affiliation, the ceremony was led by a host who bawled into a badly adjusted microphone.  A Chinese wedding consists of two parts.  The first part is very similar to a Western style wedding, where the bride and groom say their vows and become husband and wife.  In the second part, the newlyweds thank their parents for their support and love.  I thought this was a very nice gesture and the whole ceremony was very moving.  After that, all family and friends were invited to come to the stage to take pictures with the newlyweds.  Right after that, the couple went from table to table to thank their guests for coming to their wedding.  When David and Amanda reached our table, he honored me as his special guest, because I was the only foreigner at the wedding.  This was a very nice gesture of him and I felt very flattered.  At around 2:30 PM, the reception was over and people started to leave.  This had been a very interesting experience for me.  I mean, how many interns get to attend a Wedding in China?  It certainly was a great day and a wedding I will never forget.