by MariaAbroad | Photography, This Post May Contain Affiliate Links | 2 comments 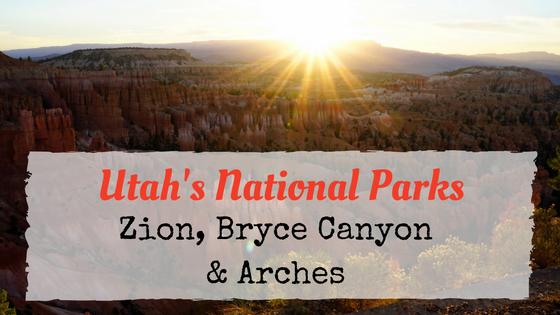 On my recent road trip through the Western US, I had the opportunity to spend some time and explored the Utah National Parks. Three of them, to be exact: Zion National Park, Bryce Canyon National Park and Arches National Park. The fiery red rocks and intricate stone and rock formations shaped over centuries by mother nature took my breath away.

I was traveling with my dog Robby and unfortunately, Utah National Parks are not very pet friendly. Zion has 1 trail that allows dogs and Bryce Canyon allows dogs only the 0.5 mile trail between Sunrise point and Sunset point. The worst for dogs was Arches National Park, as I wasn’t even allowed to take him on the short pathways to the view points to see the beautiful arches. It was 104 F degrees that day, so all I could do was jump out, let the motor running and snap a few photos before driving on. I really wish Utah National Parks were more pet friendly, so I could experience the parks with my dog 🙁

If you are thinking about a trip to the Utah National Parks, check out Expedia. They have some great deals sometimes for flights and hotels near the parks.

So since I couldn’t really take Robby anywhere, I decided to just drive through Zion National Park. The scenery was absolutely gorgeous and I soon regretted my decision to not spend more time here. Luckily, there were a ton of places to pull over and take some pictures. Take a look at some of my shots at Zion National Park: 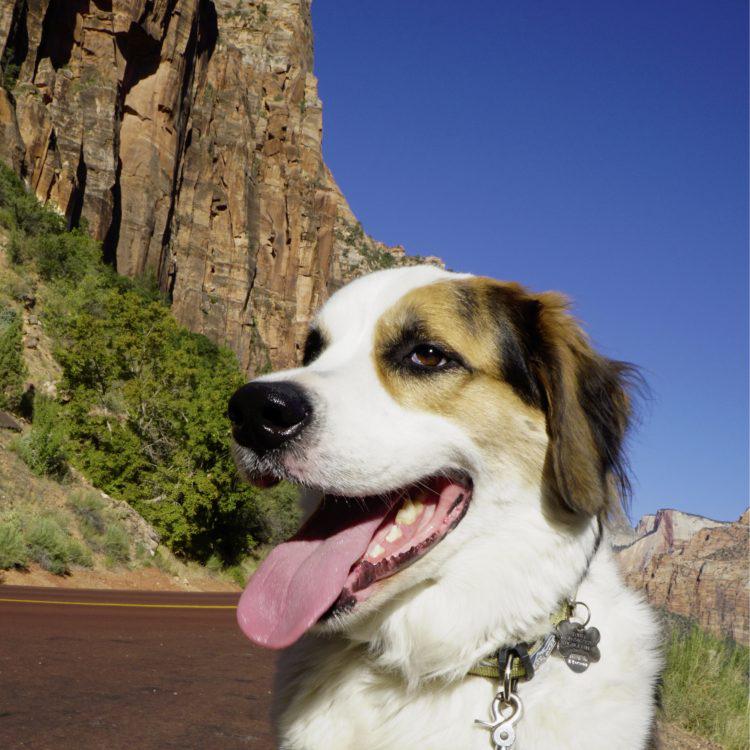 Robby loved it here. He really wanted to explore though and I had a hard time getting him back in the car. And who could blame him with this view? The Valley at Zion reminded me of Yosemite Valley, just a little less green. 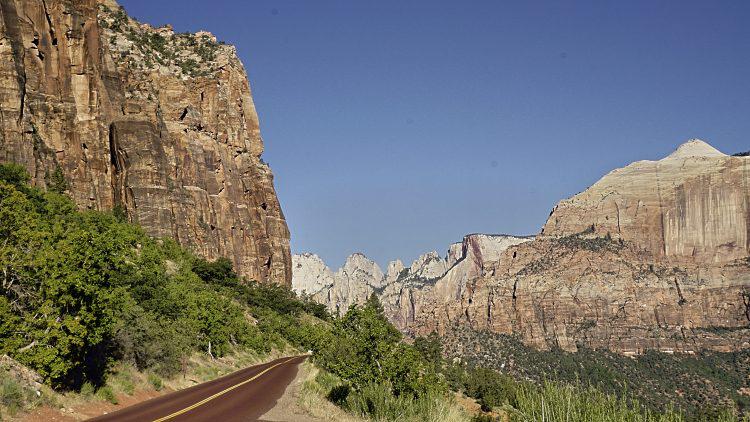 The colors of the stones ranged from creamy white to brick red and the swirly patterns within the rock were really interesting as well. 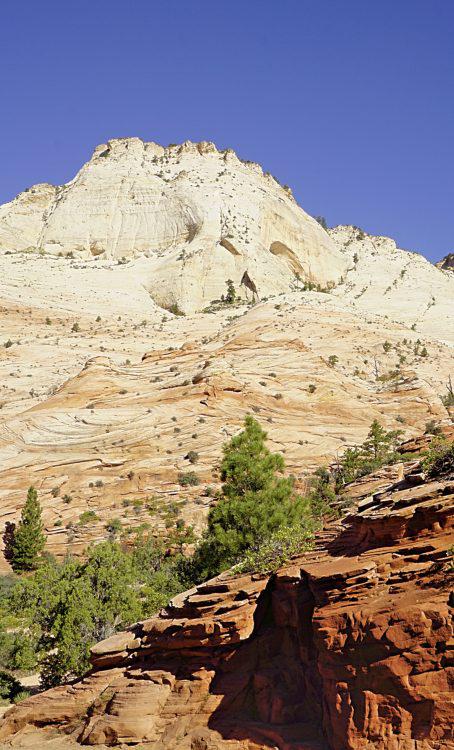 I saw this couple drive by in their Harley and it just looked like the perfect way to explore this beautiful surrounding. Now I have a new Bucket List item: Taking the husband back here and drive with him on a Harley around this breathtaking landscape. Who’s in? 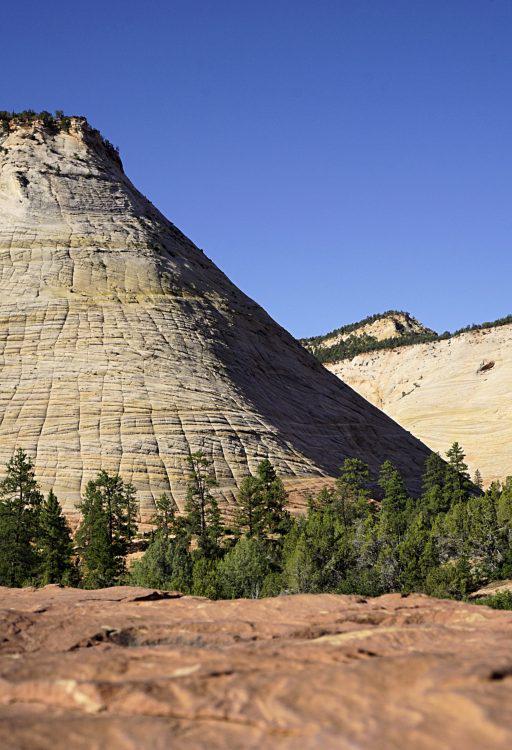 If you are planning a trip to Zion, here are some great ideas on where to stay in Zion.

Zion and Bryce Canyon are really close, only about 70 miles actually. So if you are in the are, please don’t miss out on both beauties. I spent the night car camping in Bryce Canyon and I got up bright and early to catch the sunset over Bryce Canyon. And wow was it worth it! Wouldn’t you agree? 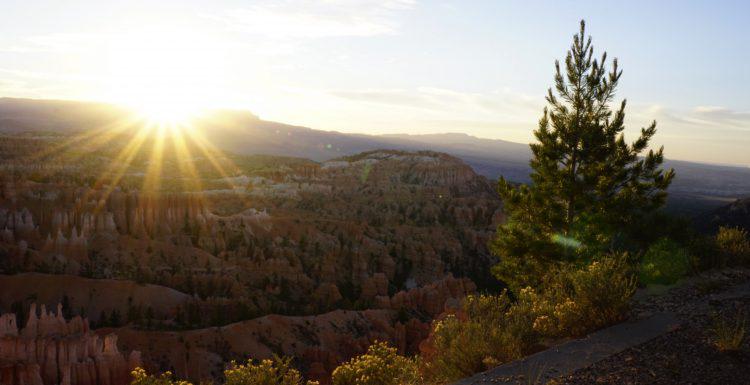 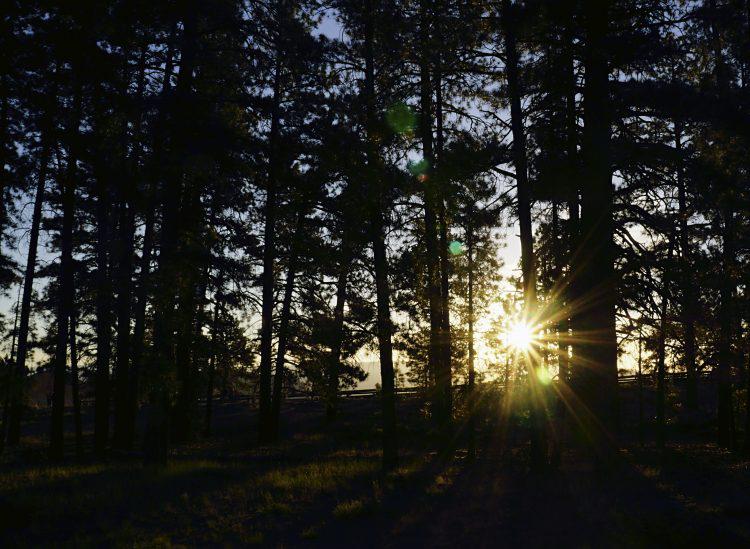 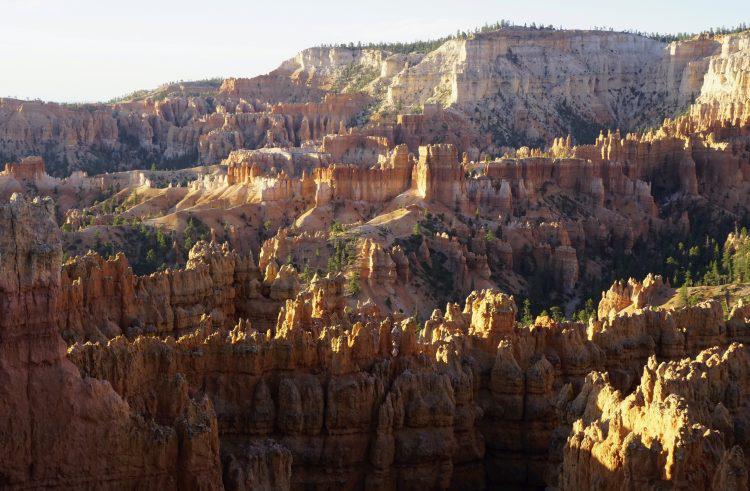 In the afternoon, a storm pulled up over Bryce Canyon and after it passed, I drove along the rim and pulled over at every view point. The sky was dark grey with a purple tint in the distance. You can even see the curtain of rain falling from the sky. But yet the sun was bathing the canyons in golden sunlight. It was absolutely magical. 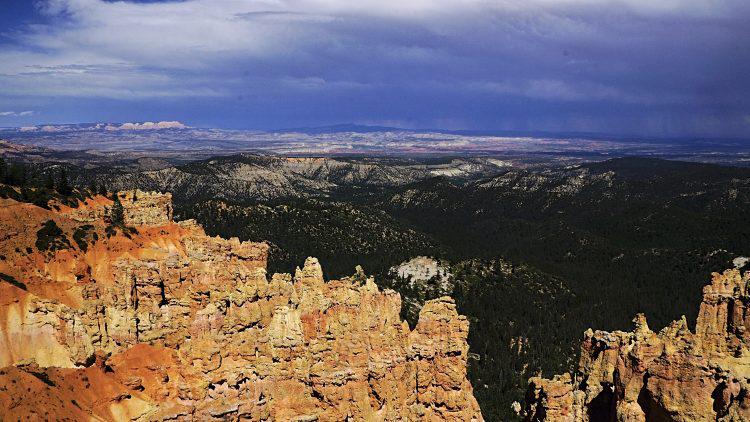 Did you look for shapes in the clouds, when you were a little kid? When I saw this cloud, I instantly thought “A saxophone playing Teddy Bear”. What do you see? 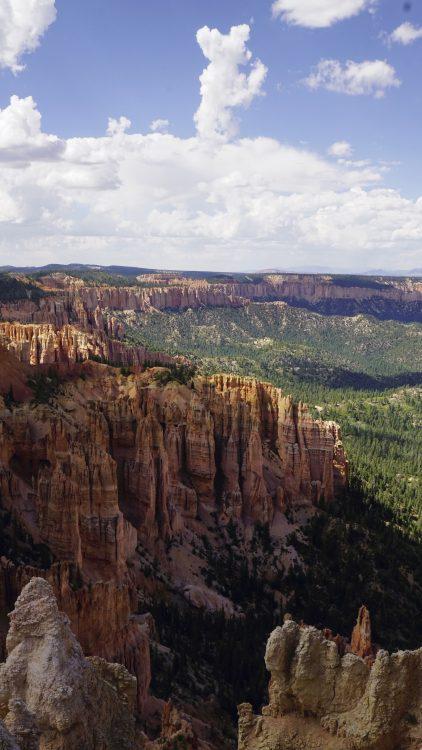 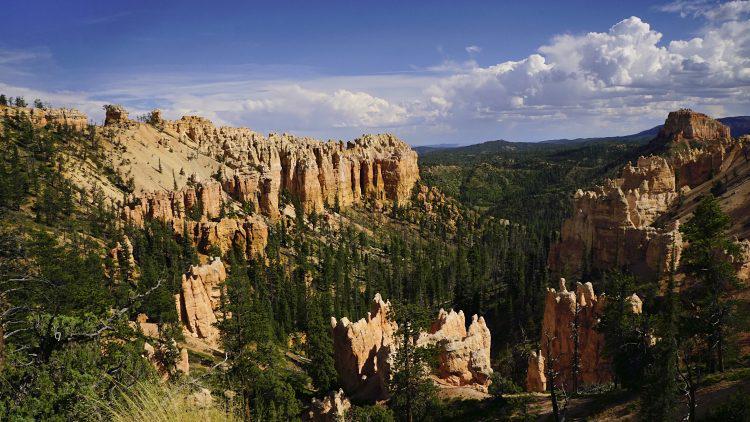 In the evening, I took Robby to watch the Sunset with me and I think most people were paying more attention to him than to the sun going down. I have to say, the sunset was a little anticlimactic. But Robby still enjoyed the view 🙂 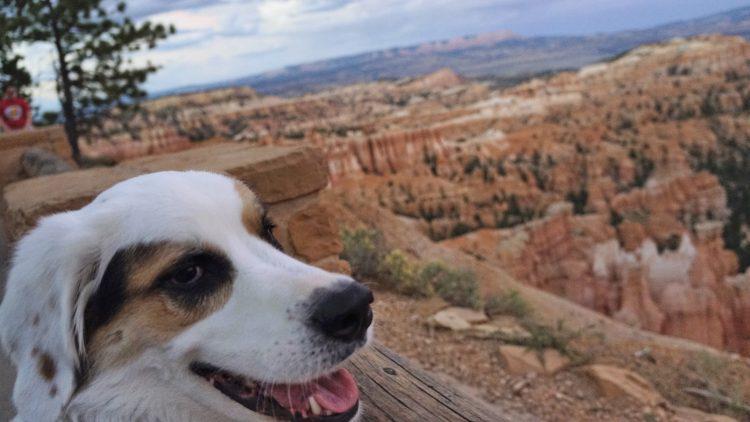 The next day, I was heading to Colorado, but on the way, I made a little detour and headed to Arches National Park. It was a super hot day and temperatures soared to 104F. Unfortunately, I couldn’t take Robby on any of the pathways to see the arches.So I pulled over in the parking lots, left Robby in the car (with AC running), ran as close as I could and snapped a few shots. So the following shots are true to the word snap shots, but I still love them.

I hope to go back one day, maybe in the winter time, go for a hike and get up close and personal, like the people in this photo! 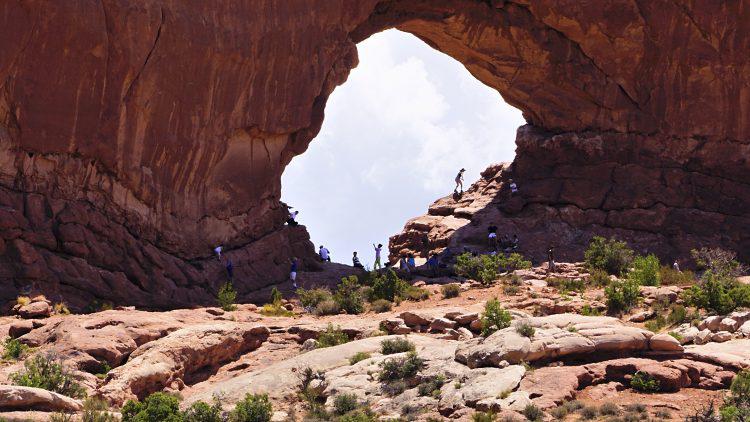 Aren’t these stone formations beautiful? They reminded me of a fleet of ships crossing the desert sea. They were huge and felt truly majestic as I stood below them. 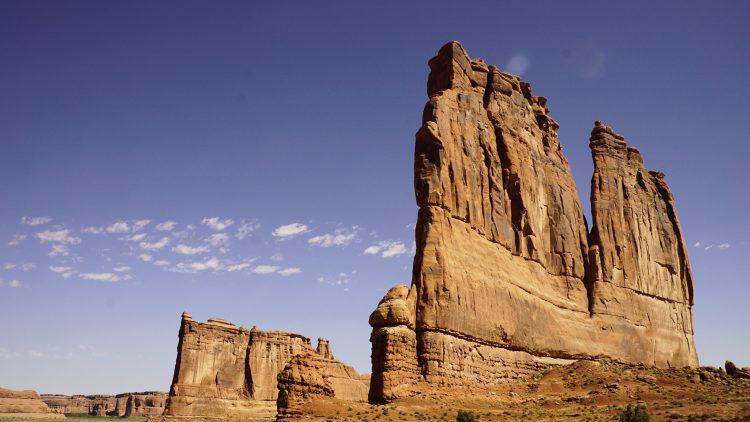 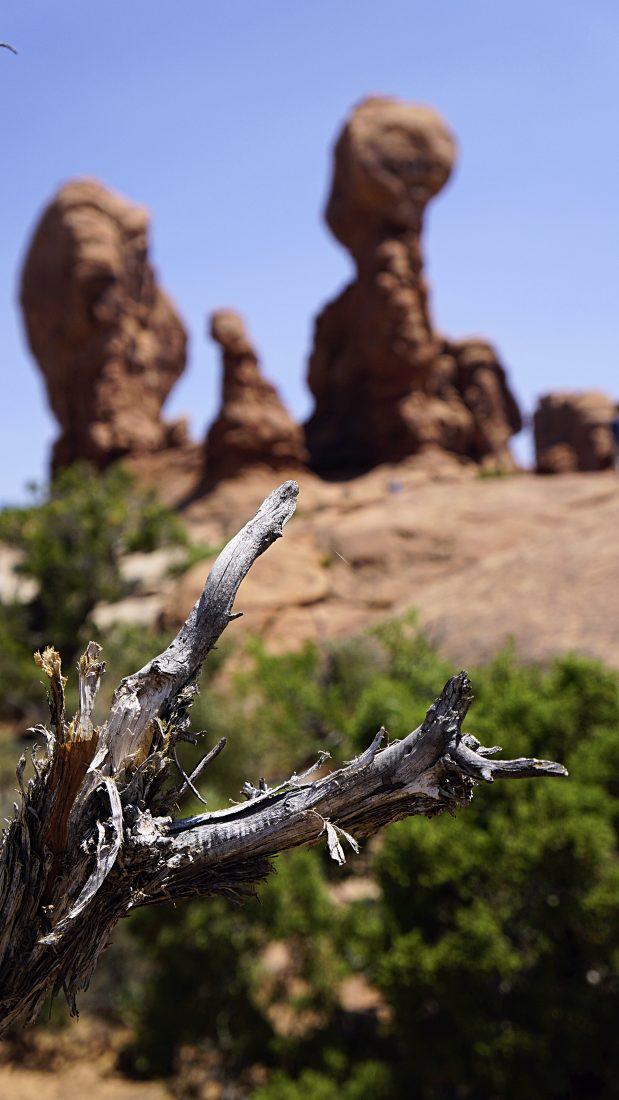 The Double Arches were also really impressive and beautiful. It is amazing to see what beautiful things persistence can achieve? Nature created this magical place by shifting one kernel of sand at a time. 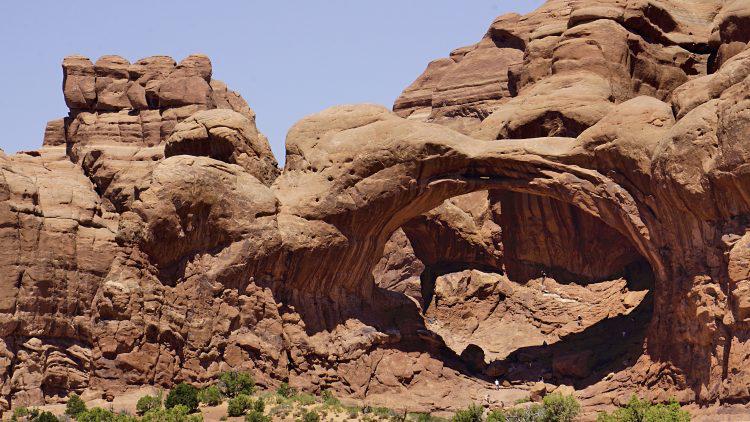 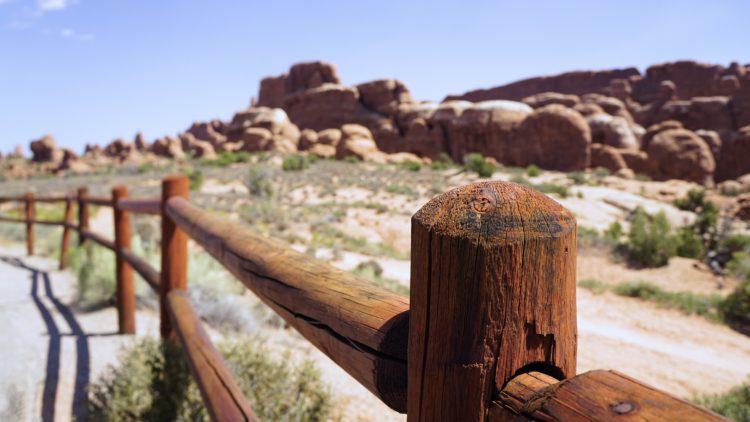 The sheer cliffs at Arches were beautiful, but don’t look too closely. There were quite a few boulders laying right up there on the edge, just waiting for a little nudge to come crashing down on the road I was driving on. 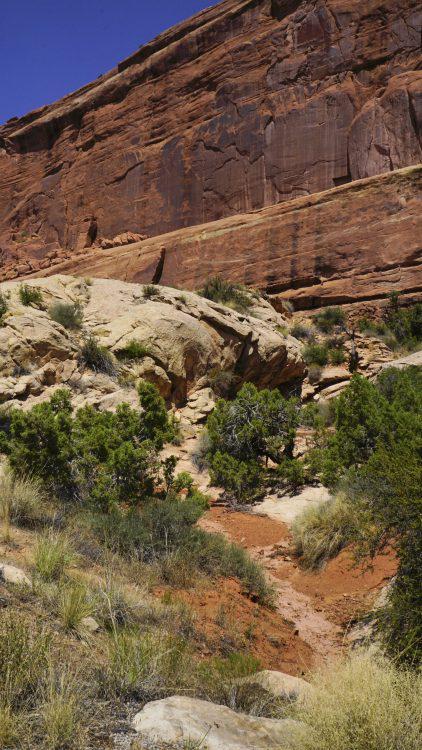 It always amazes me how colorful the desert is when you look closely. This is actually one of my favorite shots from Arches National Park. I love the textures, colors and wide open space in this photo. 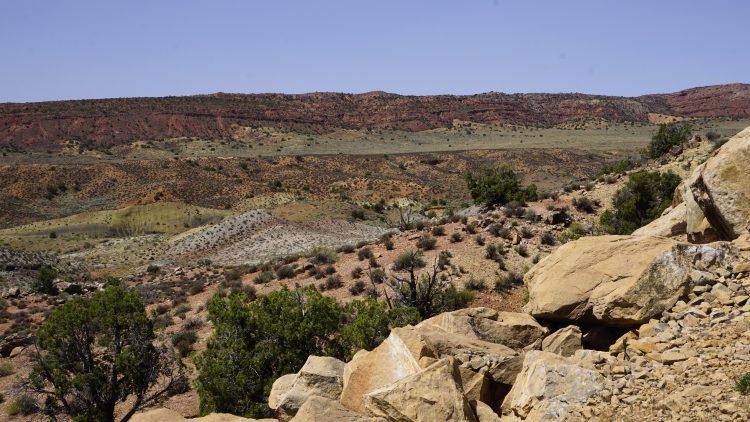 Utah has many more National Parks, so you could spend a few weeks just exploring the wonders of this state. Take a look at this list of all Utah National Parks here. If you are touring the South Western US and are planning to visit a few National Parks, it might be a good idea to invest in an annual park pass. Here is some more information about the Entrance fees:

Have you been to Utah National Parks? Which one was your favorite? 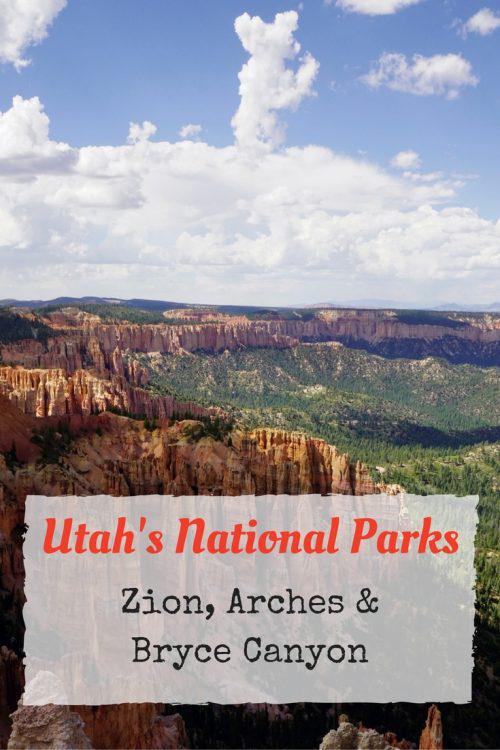 Discover and Explore the US National Parks. Save Big on Hotels and Lodges Near Zion, Bryce Canyon, the Grand Canyon, and More with Expedia