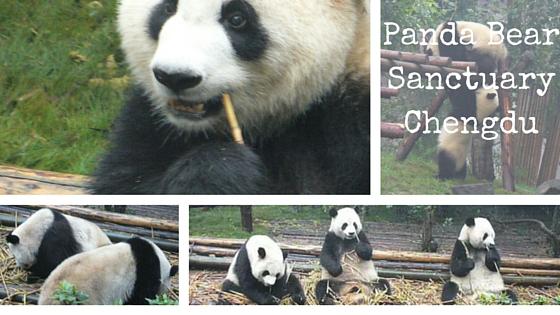 On my 6th day, I finally had a chance to visit the Pandas!!!  I had decided not to go to the large Panda reservation in Wolong, but to the closer Panda Bear Sanctuary and Research Station directly in Chengdu.  I have heard that you might not even see pandas in Wolong and I wanted to be sure to see these cute fellows. I had booked the tour with my hotel, because it was cheaper than by cab and I did not want to try out the Chinese bus system for the first time on a trip across town at 7 AM in the morning.  All guide books advice you to go there as early as the Panda Bear Sanctuary opens, because then they feed the panda bears and they are the most active.  Therefore, at 7:30 AM, I joined a group of five fellow Panda fans and off we took. The group consisted of 2 girls from Israel and 3 Asians.  At first I thought they are Chinese as well, but then I began to wonder, because their language sounded kind of familiar.  It turned out that they were from the Netherlands and only spoke a few words of Chinese.  They study international Business with an emphasis on China and part of their program is one year of studying in Shanghai.

My friends from Israel and Canada, who had visited the Pandas the days before told me about how the bears were playing around and how active they were.  Well I guess they must have been tired from the previous days, because most of them barely moved.  All we saw them doing was sleeping and eating and one of the pandas came down from his tree house, because one of the staff people poked him in his behind for about 15 minutes to get him to move.  So luckily, Nir showed me his pictures he took at the Panda Bear Sanctuary and gave me his permission to use some of his pictures and a really cute video on my blog! Thank you Nir!!! Check out the video, it is so lovely!!!

Did you know that there are Red Panda Bears? I didn’t either. They are much smaller and look a bit like a racoon and are absolutely adorable. My pictures didn’t turn out well, but WakingupWild has some really cool photos of those little critters. Go check them out!

Unfortunately, I was separated from my group, which was actually no big problem, but kept me waiting at the bus for about an hour, due to my German urge to be always on time.

On our way back, I talked to one of the girls from Holland (Mong, yes, I remember her name!!!) and we decided we would take a little rest and then explore the city together in the afternoon.

After a nice little nap, I found out that my new friends did not have the time to rest, because they had a water problem in their room and had to move.  I found out that the nice 3-star hotel right next to Sam’s was doing a promotion and a room there would have cost 7 bucks more.  But I really liked it at Sam’s and the staff was very friendly and helpful and I only had one night left anyways, so I stayed. 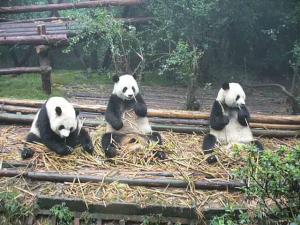 When we finally took off at around 4, we initially planned to see Wenshu Temple, but as always at that time, we could not get a cab.  So we decided to walk to the People’s Park and explore this park instead.  We had a really good time there.  For the first time, I saw the Chinese line dance, which is like a free Jazz dance lesson for elderly and housewives (sorry, no offense).  One of the elderly men came up to talk to me and he asked me whether I liked it and if we want to join.  So we did!!! I think we were THE attraction of the park that afternoon! Everybody stared at me (especially me as my friends look Asian) and how untalented I was!  As always when I am line dancing, I got a hang of the steps pretty quick, but I always, always and with no exception turn the wrong way and end up bumping into people.  Before anybody got seriously injured, we stopped and walked on.  Unfortunately, it started raining, so we slowly headed back to our hotel.  We sat had some tea and my friends taught me how to play Chinese poker! Usually, I always lose when playing card games, but one is just great.  It is a mixture between Poker and a German card game called Mau-Mau, which I loved to play as a kid.  I even won a couple of times.

The night before, the hotel staff offered me and my friend Nir free tickets to the Tibetan culture show, but we couldn’t make it.  I had hoped that luck would strike again this night, but it seemed that I’ve used up my luck during the card game, because there were no free tickets available and I did not want to spend 280 RMB for a show that lasts an hour.  My friends from Holland had booked tickets for the Sichuan Opera that night and my friend Nir had already left for Jiuzhaigou, but I still had a great last night in Chengdu and my visit at the Panda Bear Sanctuary was certainly a highlight of my trip!