Eat Your Way Around the World: Miami for Foodies 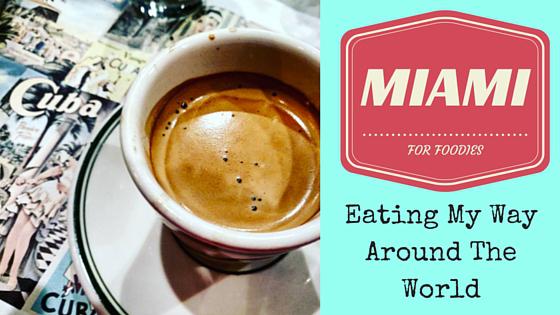 2 for 1 Holidays are awesome, aren’t they? I love it, when I get to explore an extra city due to a layover or by adding a day or two to our vacation. Most recently, the husband and I went on a cruise to the Dominican Republic with Fathom Travels. The cruise was leaving out of Miami on a Sunday, so we decided to add a day before and after to explore the city. If know me a little, you know that I love to cook and eat foods from all over the world and so I wanted to discover a special side of Miami: Miami for Foodies.

Honestly, I never would have thought that Miami would have so many culinary highlights to offer. I was really looking forward to some authentic Cuban food in little Havana, but other than that I didn’t have high expectations that Miami is a Foodie destination. Actually, I didn’t have high hopes for Miami at all. The last couple of times I had been to Miami was in the late 90s and it was kind of dumpy, dirty and not so glamorous. But I have to say. Miami, you clean up nicely and you are now a gem of a city. It has a very clean and modern feel, yet kept its character and style. Quite a pleasant surprise. But enough about this. Lets talk food and my favorite restaurants in Miami (click to see deals for restaurants in Miami on restaurants.com)

Here are some of my recommendations – Miami for Foodies: 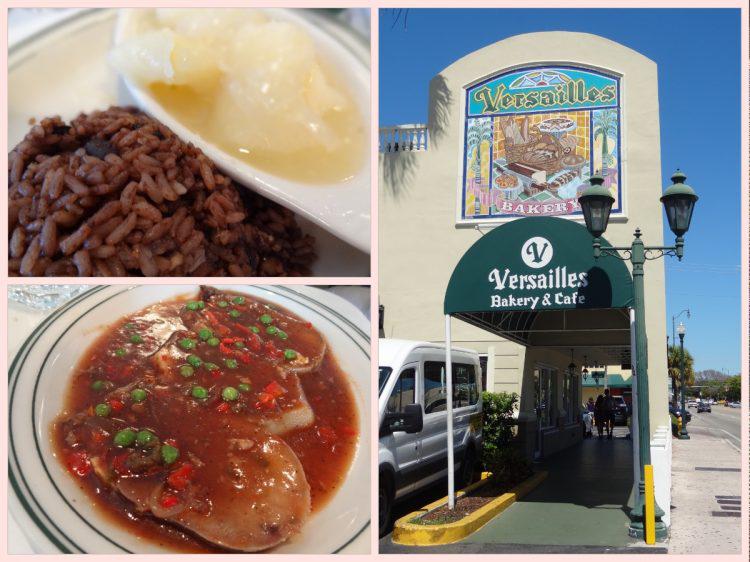 Our crazy Über driver that took us from the airport to our hotel didn’t speak much English, but who could give us better recommendations for Cuban food than a Cuban living in Miami? We asked her for her favorite place for Cuban Food in Miami and she said hands down: Versailles. When we got to the hotel, we asked the receptionist, also of Cuban heritage, for her recommendation. And guess what she said: Versailles.

Versailles is not only a restaurant, it is an empire. It is huge and the whole operation is organized to a T. The head waiter and the maî·tre d’ have walkie talkies to make the seating process more efficient. Why? Because there is always a line out the door. We were there on a Saturday at around 3.30 PM and they had a wait. 30 minutes turned into 10 and we were seated.

The ambiance at Versailles reminded me of the Godfather Part 2, a Cuba of the 1950s right before the coup d’état. Large chandeliers and oversized mirrors with golden trim, green walls and carpets gave you the feeling like you stepped into a time machine.

And then the food. Slow cooked pork, with a kick of vinegar and slivers of onions, paired with crunchy, salty pork skin. A side of black beans and rice and boiled yuca. The husband had beef tongue with a thick and velvety red wine gravy, the combination with sweet fried plantains was surprisingly amazing. Cuban food is down to earth and hearty, but it has finesse. It combines flavors and textures that make your mouth sparkle. Simply amazing.

Whatever you do, no matter how stuffed you feel after the main course – Do NOT leave without trying one of their pastelitos and a Cuban coffee. We shared the guava and cream cheese pastelito and it was to die for in combination with the sweet Cuban coffee. 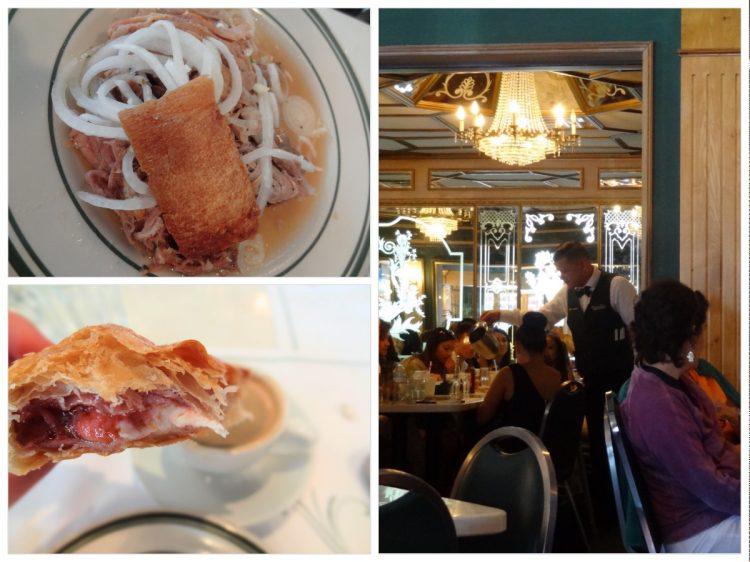 What to Eat: Pastelitos and Cuban Coffee 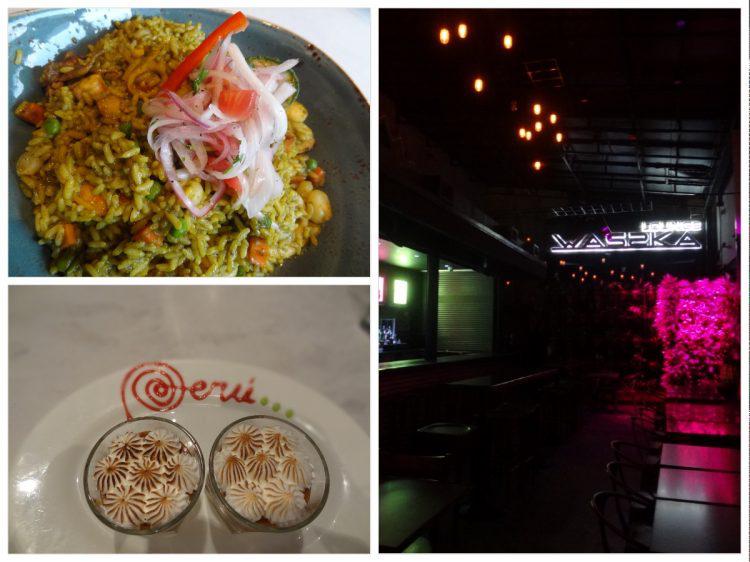 After our return from the Dominican Republic, we had almost 2 more days to explore Miami. A colleague of my husband lives and works in Miami, so we had a chance to meet them for dinner. They suggested a Peruvian restaurant called CVI.CHE. I love ceviche, so a restaurant named after my favorite Peruvian dish? Count me in and get the party started. CVI.CHE is very modern and the design is just like you imagine a cool and hip place in Miami to look like. The open and airy concept mixed with natural materials get a burst of life with popping colors in some accent elements. 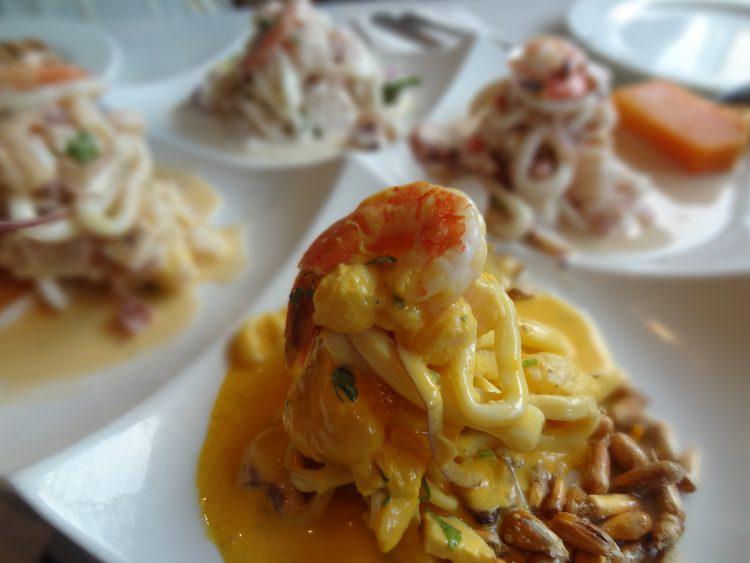 As an appetizer, we ordered the ceviche sampler, which included 4 varieties of ceviche. All of them were simply amazing. From fruity to spice, creamy to delicate, those four varieties had a distinct flavor that was unique and interesting. I ordered a rice dish with seafood that was similar to a seafood risotto and simply amazing. But the husband won the lottery with his order: A daily special that consisted of a rack of lamb and mushroom risotto. Doesn’t it look amazing? 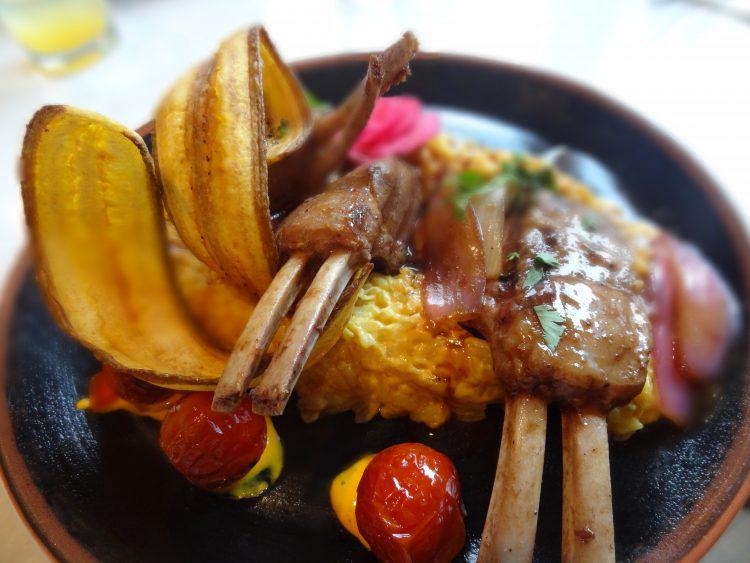 What to Eat: Ceviche Sampler

This was the #2 Cuban restaurant that was recommended to us, this time from Hotel receptionist #2 in hotel #2. Havana 1957 is a Miami chain restaurant trying to bring Cuban food to the mainstream American people and tourists of Miami. Unfortunately, it doesn’t really work out. It is about as Cuban as Olive Garden is Italian. It all looks and feels a bit fake and the food just isn’t up to par with the other Cuban food we tried in Miami (and other cities). It wasn’t bad, but it merely meh.

BUT!!! They have the best mojito I have ever tasted. They put a real piece of sugar cane in there to sweeten it and it tastes simply amazing. So if you are in the neighborhood go in and have a drink, you won’t regret it!

What to Drink: Their Mojitos are out of this world. They make them with real sugar cane!

Sipping my last Cuban coffee in Miami. Hopefully I get to enjoy the next one in Havana ?

While I didn’t personally go on this tour, one of my friends and fellow Travel Blogger Noel Morata went on this amazing Miami for Foodies Tour and took a video highlighting all the scrumptious delicacies he tried. I absolutely regret not going, because Noel’s video rubs it in my face even more that I missed some great spots in Miami for Foodies. Well, see for yourself if this is something you should add to your itinerary. And for me, I have another excuse to go back to Miami 😉

Have you been to Miami and enjoyed some of the food there? What was your favorite? And before you go, remember to check restaurants.com for great deals on restaurants.

Miami for Foodies – Pin for later: 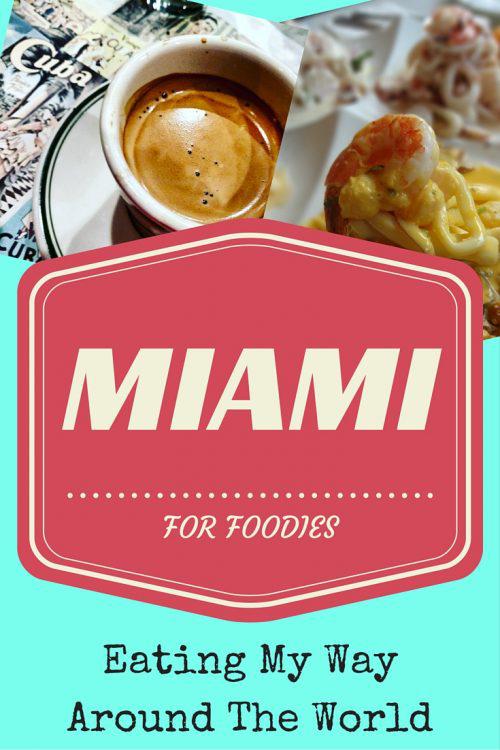