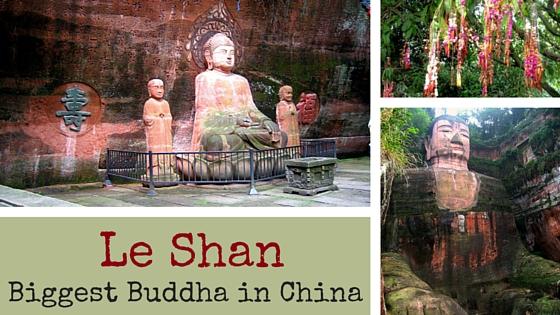 I should have known from the start, that this trip to Le Shan and Emei Shan was doomed to failure… But let me start from the beginning.  Yesterday I booked a 2-day trip at my hostel.  The first day was supposed to take us to Le Shan, the largest Buddha in the world.  Day 2 should go to Emei Shan, one of the 5 holy mountains of Buddhism.  I actually did not care too much about the Buddha, but I was looking forward to Emei Shan, which is supposed to be a beautiful mountain with a breathtaking scenery, lots of monasteries and even wild monkeys. Check out my picture gallery below for my snap shots of Le Shan! 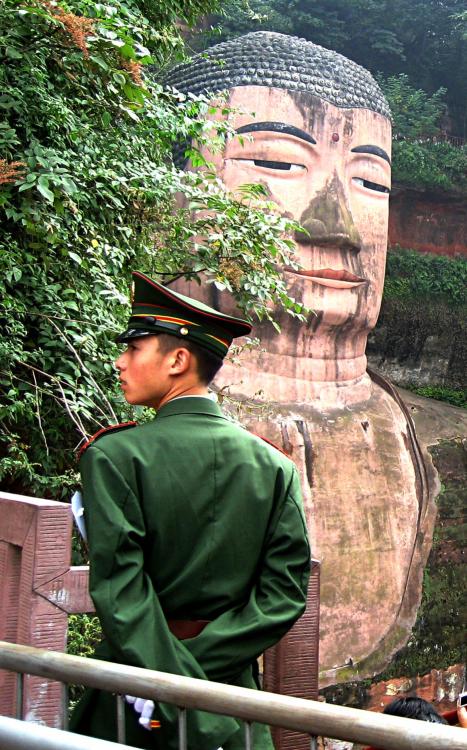 The bus was to pick me up at 6:30 AM at my hostel, so I planned ahead and packed my bag the night before and went to bed early.  Unfortunately, I did not set my alarm clock to 5 AM, but to 5 PM… So at 6:30 AM, the receptionist of Sam’s Guesthouse woke me up when she called me that the bus is waiting for me.  Within 5 minutes I threw on some clothes, grabbed my bag and ran to catch my bus.  After all I had paid 590 Yuan to take this trip.  About 25 Chinese tourists stared angrily at me, because of the delay.  After about an hour on the bus it hit me.  I had forgotten my passport in my hotel room, which is required for checking into any hotel in China.  To make matters worse, the tour guide did not speak a single word of English, which of course nobody mentioned when I booked the trip.  Even worse, when I tried to ask her when the bus is leaving from Le Shan to Emei Shan with my outstanding Chinese skills, she refused to repeat the answer and just rolled her eyes.  At this point, all I wanted to do was go back to Chengdu and cry.

After about 3 hours, we arrived at Le Shan and we stopped at the tourist information center to pick up our tour guide for Le Shan.  I really had to go to the bathroom, and this place even looked as if it had a western style toilet, but the bus driver looked us in the bus for about half an hour and nobody could get out.  When we arrived at the parking lot of Le Shan, I ran off to the bathroom.  Of course, when I came back, my group was nowhere to be found, so I ran about half a mile to the entrance where I finally caught up with them.  At the entrance, one of the straps of my fancy 100 RMB backpack ripped.  As we ascended the mountain on a narrow staircase, we got into our first “tourist traffic jam”, which means we climbed the stairs in a huge mob with several hundred other tourists.  There was no way to stop, take a picture, see anything, or stay close to your group.  The good part about it was, that you actually did not need to move at all, because the masses behind you would push you all the way to the top anyways.  When we reached the peak of the mountain, we saw another, a little bit more organized, long 4-row queue of people.  Luckily I found two members of my group and to my great surprise, they both spoke English.  It was a girl from Korea, who was staying at Sam’s guesthouse too and she spoke a few words of English and even some Chinese.  The guy that was with her was from Japan and his English was very good.  So from then on, we three stayed together, as a lonesome group of foreigners among all the Chinese tourists.

At first, the queue was moving pretty fast and we figured that we would reach the end of the 4 rows in about one hour.  Haha, stupid us!!!  Of course we did not see, that this was only about one third of the whole queue!!!  As you might know, the Chinese have absolutely no need for any kind of personal space, so when I left about 1 inch between me and the Chinese person in front of me, a guard was shouting at me to move on.

As I told you before, all I wanted in Chengdu was to get away from the crowds of Beijing, so this was like a nightmare come true.  Of course, I found many warnings on the web that many places will be crowded during this week, but there is a huge difference between the Western understanding of “crowded” and the Chinese understanding of it.  I felt like I was standing in the second row of a Backstreetboys concert, but instead of screaming teenagers, there were middle aged men and women, and instead of carrying underwear to throw on the stage, they were carrying incents to burn in front of their god.  Nevertheless, the pushing and shoveling was just as bad.

Then, after about 3 ½ hours of standing in line, we finally saw the first glimpse of the Buddha.  What an impressive sight.  As I am not a Buddhist, I did not care to much about the Buddha in the beginning, but when I saw it, I was in real awe of its sheer size.  It has a height of 71 m (about 233 ft) and the figure is carved in red sandstone, overlooking the banks of the river. Click here for some more info and history about Le Shan, known as the biggest Buddha in China. While we were staring at the Buddha, we went down to the banks of the river, and of course, we had to get back up that hill again somehow.  The only way up was on a very steep staircase.  Some of the stairs reached almost up to my hip, I guess whoever built them was not very familiar with Da Vinci’s Golden Section…  Luckily, my Japanese friend offered to carry my backpack to the top, so I could concentrate on crawling up the stairs.  I am still wondering how all these cute old little Chinese ladies managed to get up there without even breaking a sweat, wearing heels and their Sunday’s Best.

At a small rest area, we found our tour guide and the rest of our group.  With the help of my Korean friend, we asked the tour guide, whether Emei Shan would be as crowded as Le Shan.  When she said yes, I decided to head back to Chengdu as soon as possible, because I just could not take any more crowds anymore.  After a short break, we climbed further up the mountain and reached the peak once more.  This time, we luckily did not join the queue again, but headed to the beautiful gardens of the monastery.  Those were really nice and not as crowded as the trail to the Buddha.   I really have to admit, that it is very impressive and I am glad I saw it, but next time I would do it differently.  I would take the boat tour and then walk around the garden and definitely pick another time than the first week of October!

When we arrived at the parking lot, we met with the previous tour guide and luckily she was in a better mood than before.  My Korean friend talked her into giving me 100 RMB back, because I wanted to return to Chengdu.  She even helped me to find a ride back on a bus to Chengdu.  I still don’t know whether she did it because then she had to worry about one less foreigner, or whether she really wanted to help me.  Well, I got back to Chengdu in the early evening and as I had not eaten anything, I had a nice bowl of noodles before I went back to my room to hide from mankind… at least for this day!!! 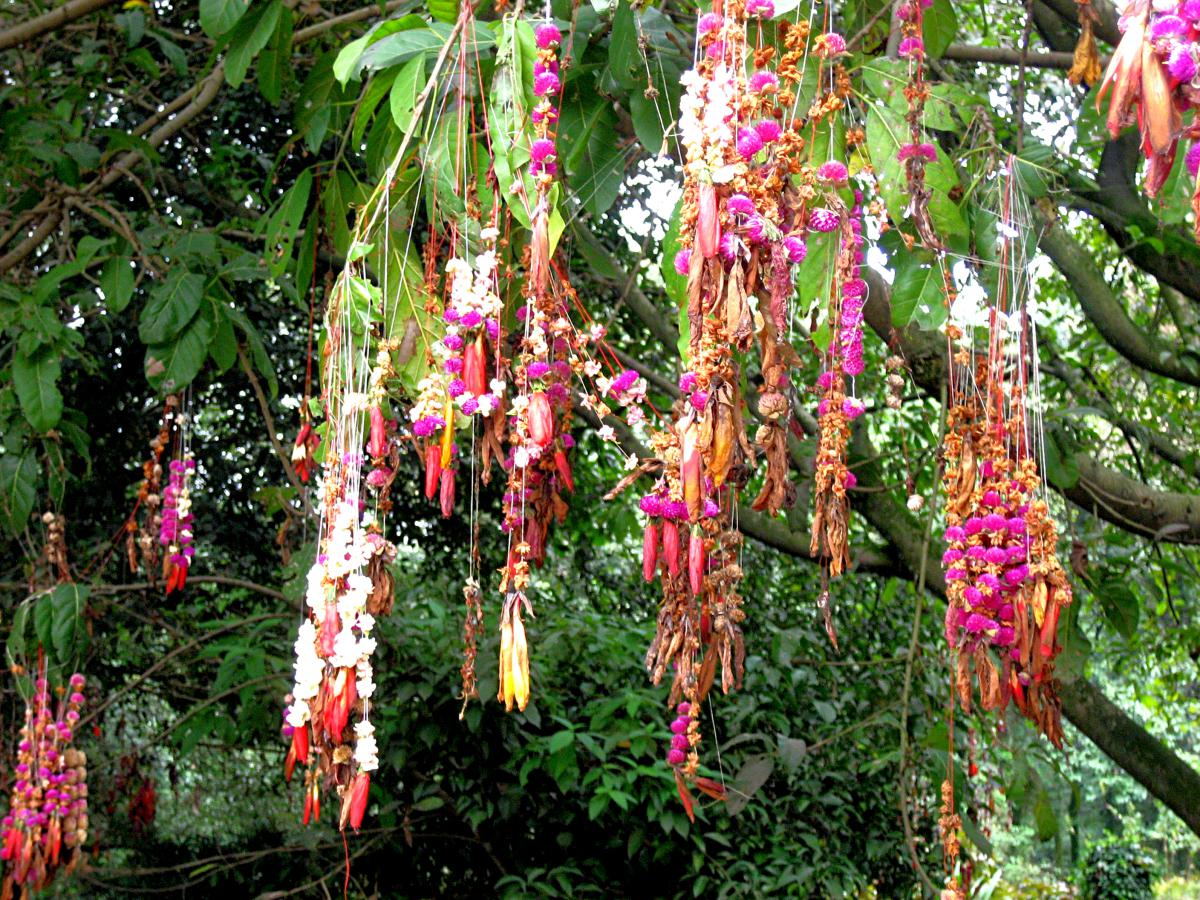 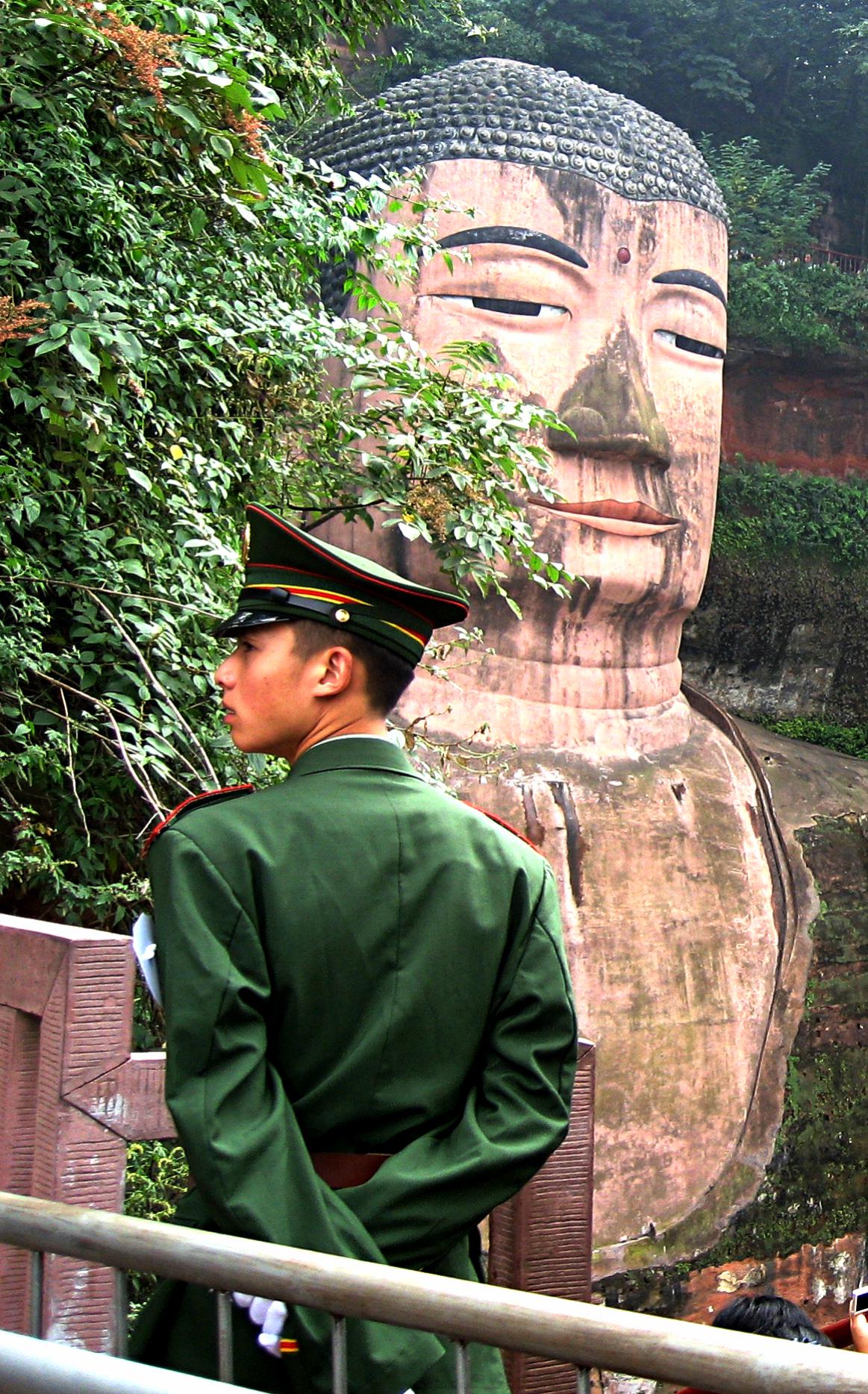 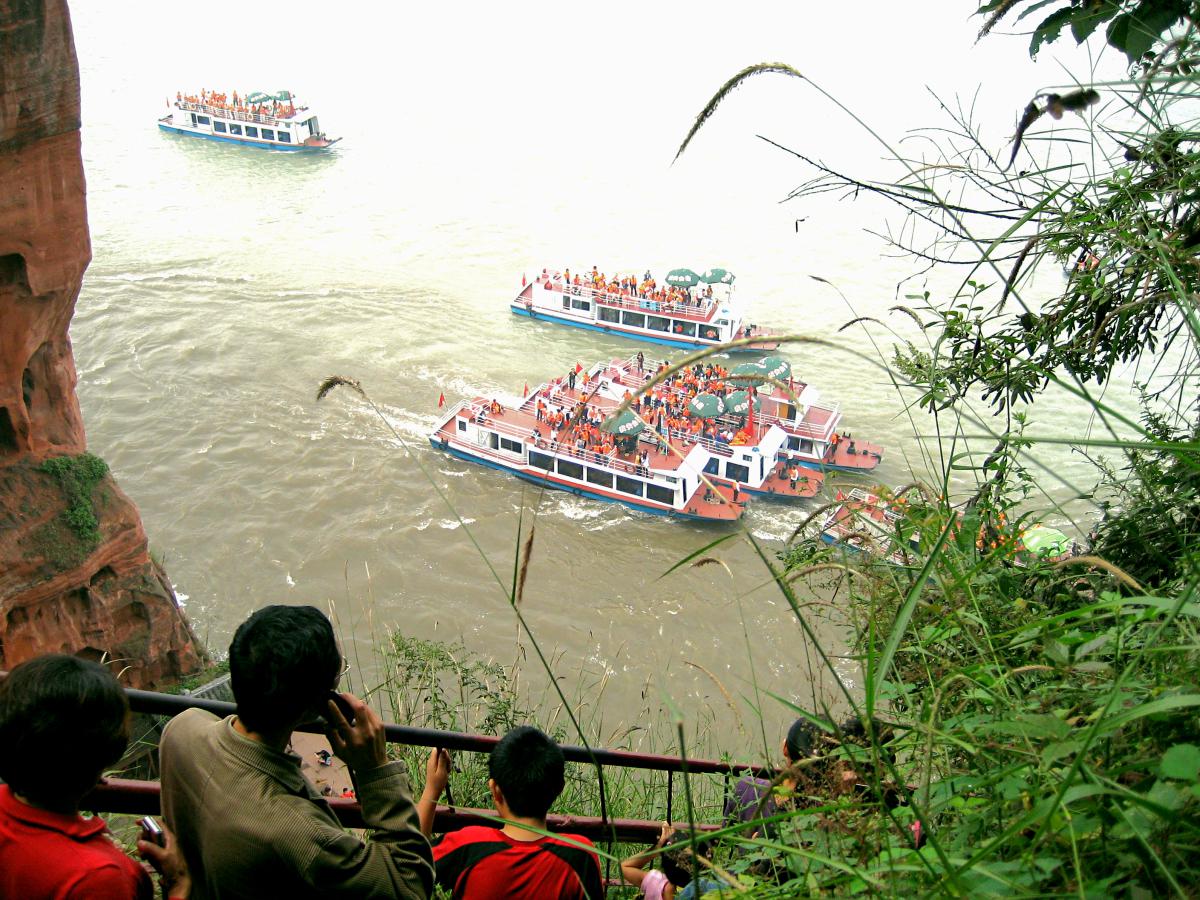 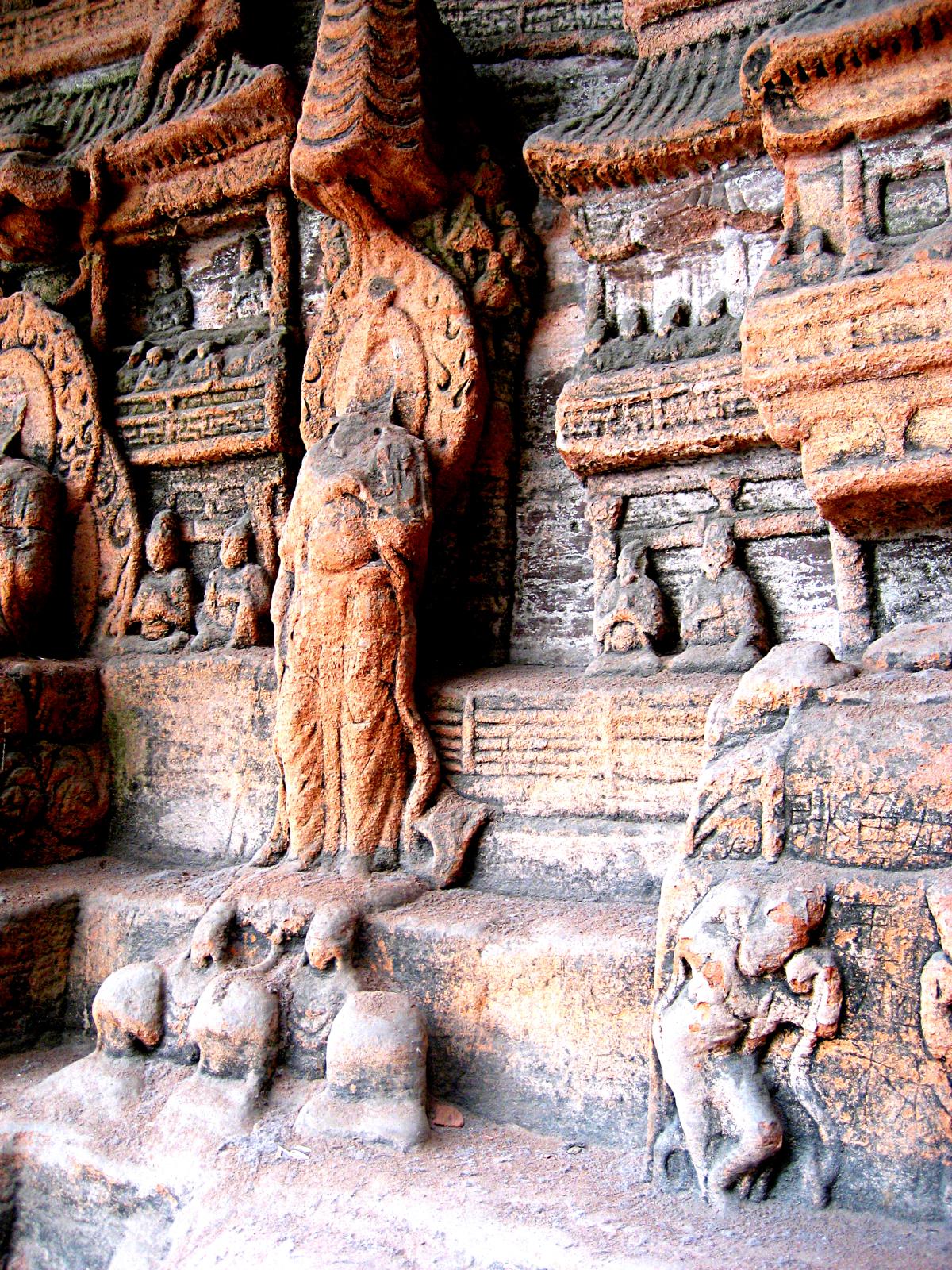 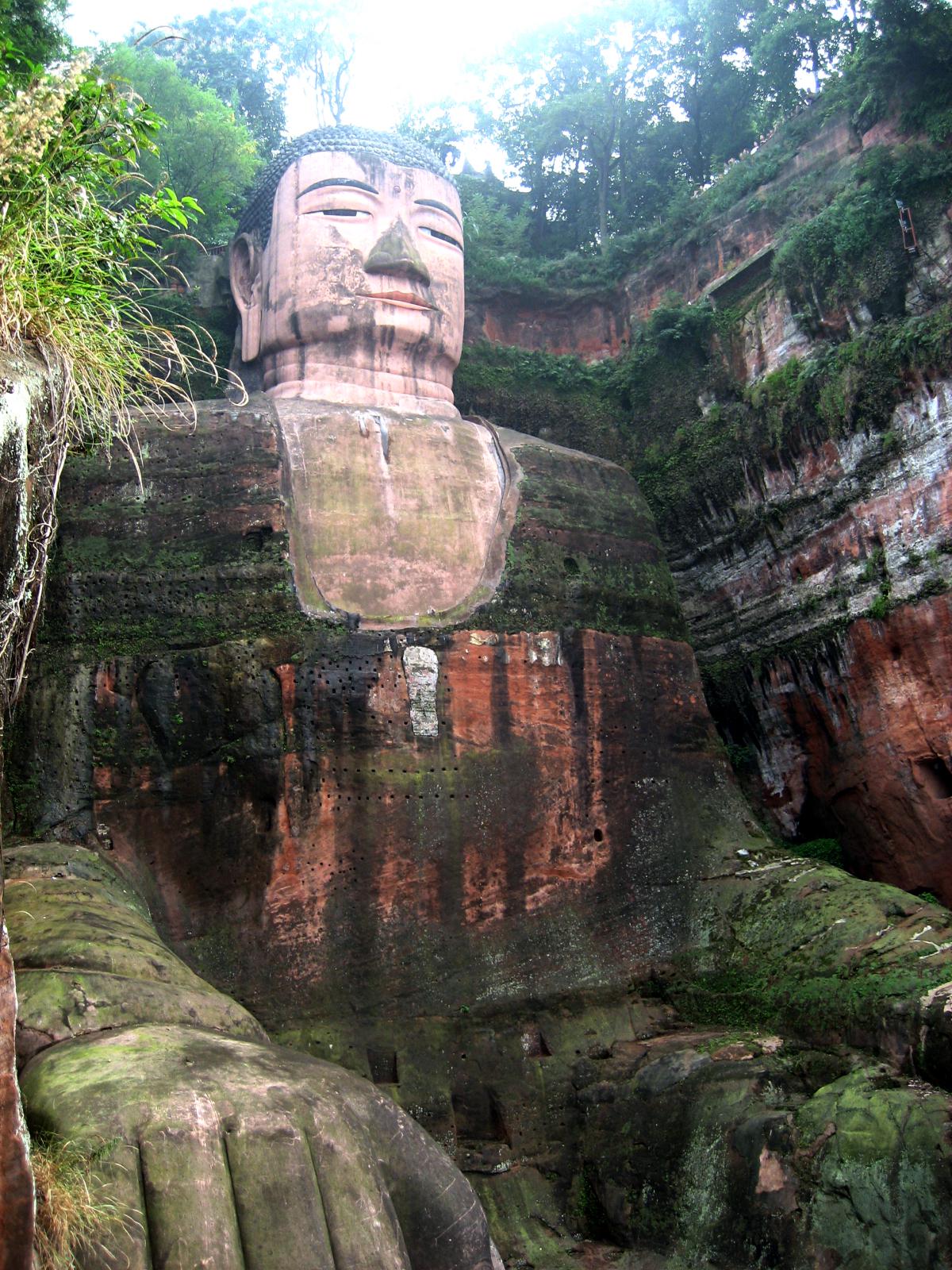 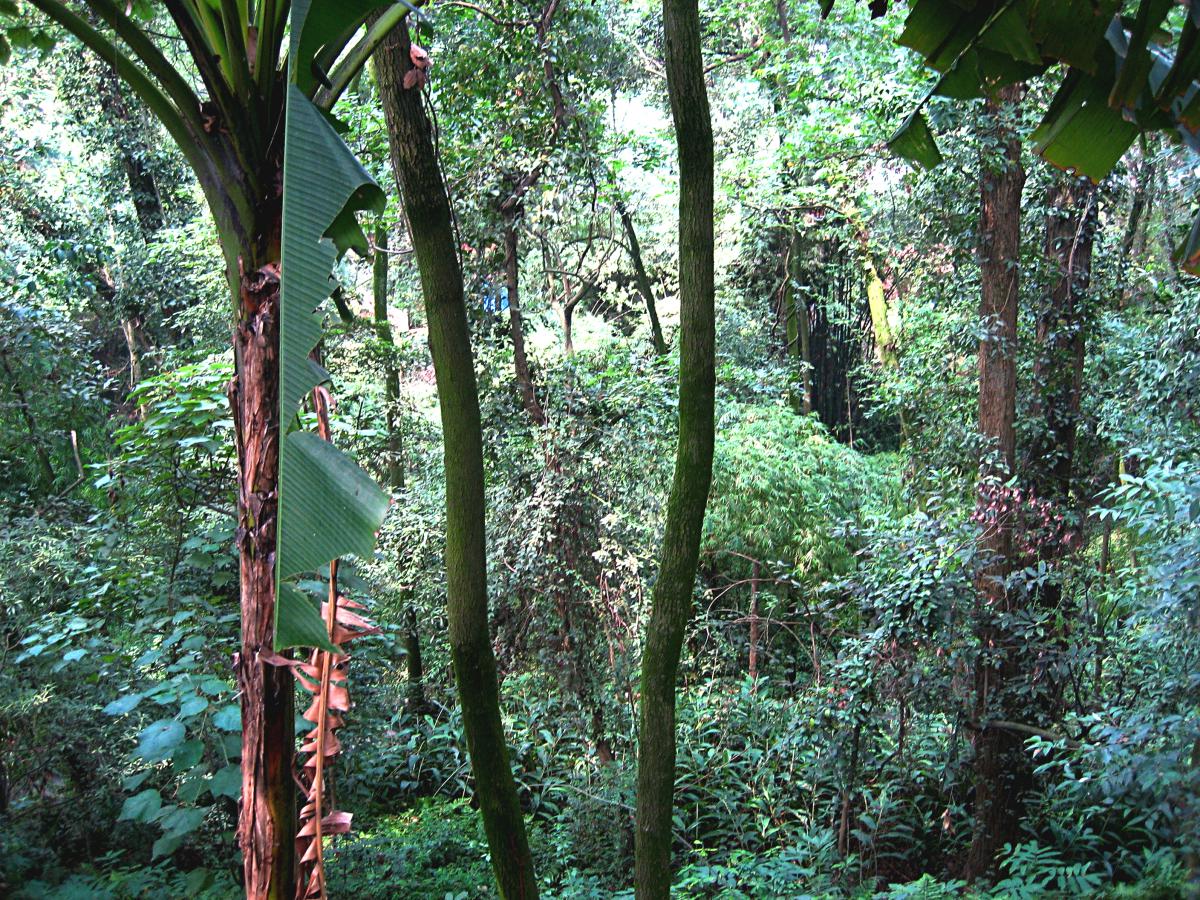 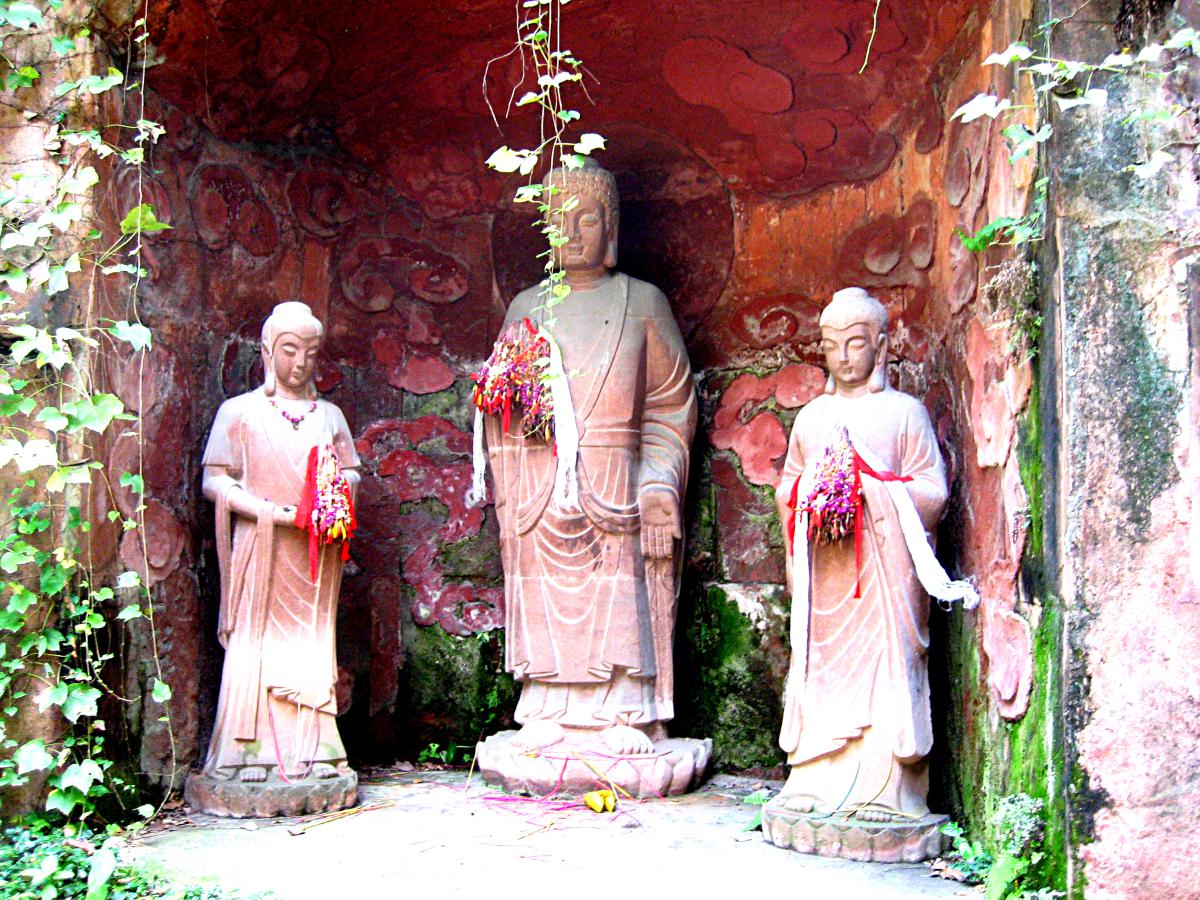 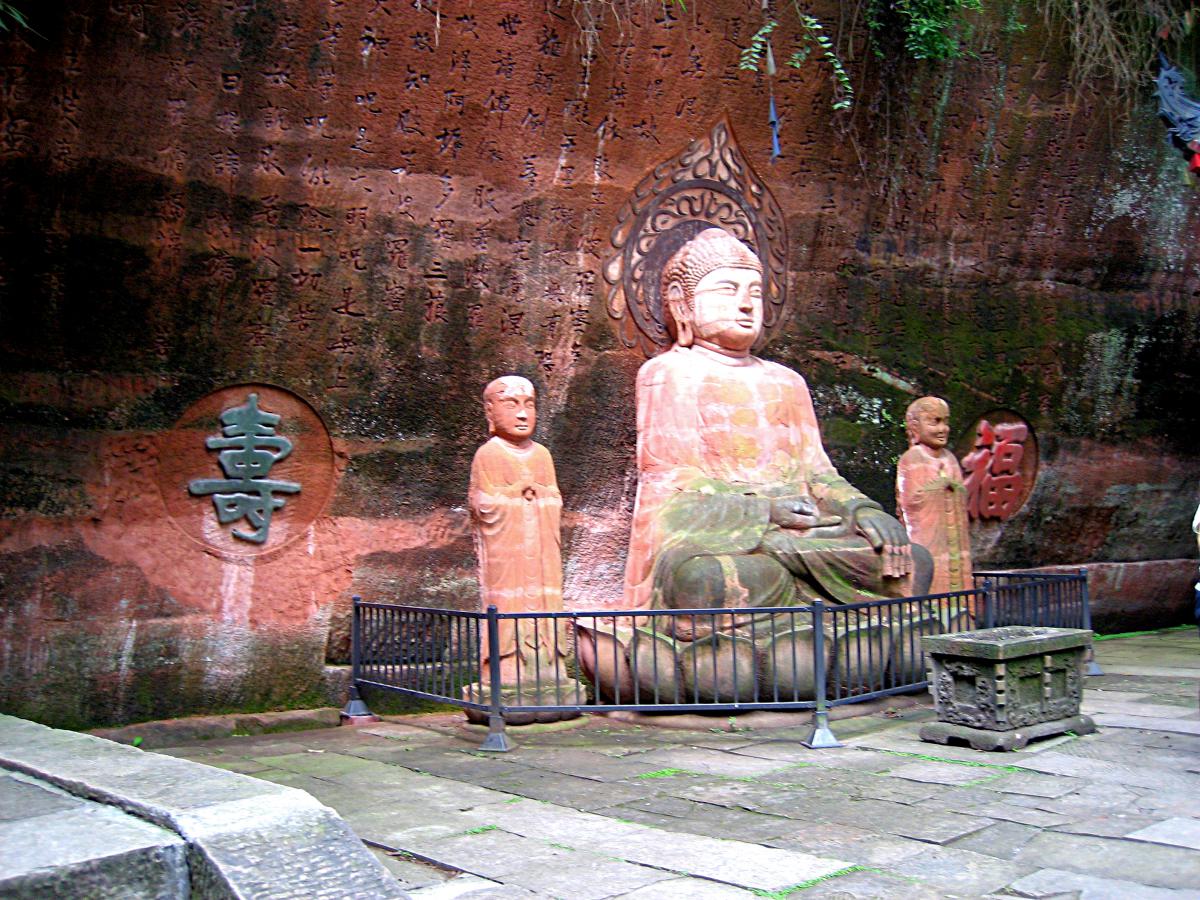