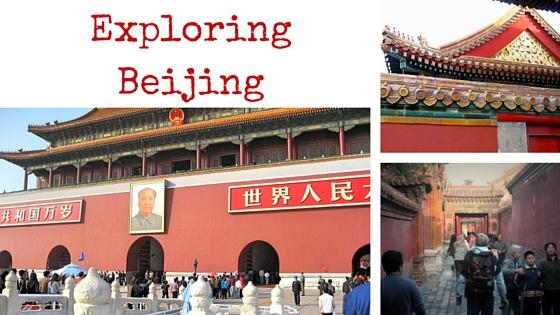 On Saturday morning Nir, one of the Israelis I met in Chengdu flew in from Xi’an and I met him at IKEA.  It was really nice to see him again.  Nir planned to stay in Beijing from Saturday until Tuesday, and of course he wanted to see all the major sights. So we set out to an adventure of exploring Beijing. But first, he had some run errands and so we went to Wangfujing Shopping Street.  No, this time I did not eat scorpions!!!  After a short stroll down Wangfujing, we went to the Forbidden City.  Unfortunately, it was already close to 3 PM, so we only had time to cover the main areas.  Nir was really impressed and wanted to go back on one of the other days.

If you want to learn more about the Forbidden City, here is a really cool video by National Geographic that takes you along on an exciting journey through this amazing palace:

When we left the Forbidden City right at closing time, we tried to find a ticket office to get tickets for the Acrobatic show.  Eventually, we found one, but they told us the show started at 5.15 PM, so we decided to head out for dinner instead and see the show the next day.

We went to a nice and typical Chinese restaurant, the kind that looks like a waiting room.  Most of these restaurants only have one square room, the light is so bright that you could perform surgery in it and decoration of any kind is non-existing.  I really don’t understand why they cannot dim the lights at least a little bit.  The impressive part though is that these kinds of restaurants usually offer the best and most original food at a very affordable price.  We ordered some delicious gung pao qi ding (Chicken with peanuts) and some mutton, which was not quite as good, because the meat still rather rare.

After a very nice meal, we took a cab to Hou Hai Lake, a very nice but touristy bar area in Beijing.  Hou Hai is a large lake north of the Forbidden City and all the bars are waterfront bars.  Some areas are extremely fancy and touristy and did not really fit our taste, so we kept on walking to the other side of the lake.  On our way there, we saw a group of old Chinese people gathering together to sing songs.  It felt like some sort of stand-up show.  Everybody who wanted to participate just stood up and shared a song.  We were the only foreigners there and when they saw us coming, one of the guys started to sing a Chinese version of Jingle Bells.  We stood there and had a good time listening to their songs and watching this authentic Chinese performance.

After a while, we went on walking and ended up in a nice little bar with a nice terrace.  We had a stunning view of the lake and all the lights of the bars on the other side.  It was truly beautiful.  After enjoying the view and a couple of beers, we headed back to the other side of the lake and on our way, we found a rather funny sign with the best Chinglish so far.  The sign reads:  No Swimming, No Fishing, No Dumping of Dirty water and No Raise of Poultries!  The first three are easy to understand but the fourth one really kept us wondering.  It was until a few days later when I asked my Chinese teacher what the hell this was supposed to mean that we found out.  Mr. Wang explained it simple means: Do not feed the ducks!  Oh yes, sure, this was obvious!!!

On the other side of Hou Hai Lake, we found a bar where you could smoke hookah, or nagirla as it is in Hebrew…  Nir did not have a hookah in almost 2 months, so we sat down and ordered one.  Unfortunately, there was a leek somewhere and no matter how hard we inhaled, there was no smoke coming out.  Nevertheless, we had a great day exploring Beijing and a fun evening!!! 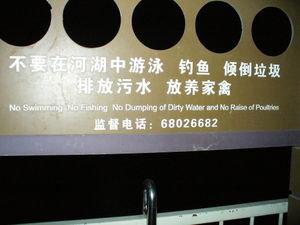