This post was written by Maria (cool name, don’t ya think?). She is a friend of mine who grew up in Spain, went to university in France and studied abroad in the US. She will share her experience on the differences between living in Spain and the US.

As a Spanish citizen that has spent 10 months living in the USA, I am going to share with you the similarities and differences between living in Spain and in the US.

This means understanding each other can sometimes become a cultural problem, depending on the state or region where we are in each country. 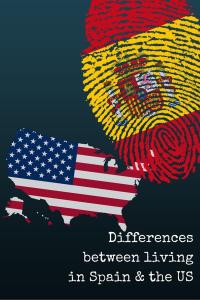 Secondly, timetables are very different in Spain than in the U.S. In the everyday life, there is a 2 hour gap between the American and the Spanish timing. So as to say, Spanish people have breakfast between 9 and 10am, lunch between 2 and 3pm and dinner between 9 and 10pm. Americans do most things much sooner throughout the day.

Going out is also very different in both countries. Spanish people are used to go out much more often than Americans, no matter what age. In Spain you can see 6 years old children at 12 or 1am in the evening with their parents in a restaurant or a bar enjoying each others company. This would be very shocking for Americans.

Businesses and public places have different timetables too. Businesses in Spain, only stores and boutiques, open from 10am to 2pm and from 5pm to 8pm, while they are usually open from 10 am until 7pm in the U.S. That is what is defined as the “siesta”, but mainly by foreigners. This custom is becoming less and less popular in Spain. Also, restaurants serve dinner until 11pm or even 12am while kitchens normally close around 9 or 10pm in the U.S. And bars and clubs close at 5 or 6 am in Spain while at 1 or 2 am for the Americans. This makes a huge difference in the night life style between these two countries.

Everything is bigger in the US

A very big difference of consumption is the sizes of goods sold in the U.S.A comparing to those sold in Europe as a whole. Americans buy enormous bottles of shampoo, for example while those sizes do not even exist in Europe. At the same time, housing is not also the same. Houses are smaller in Spain because they are more expensive. In big cities the majority of people live in apartments while in houses in the U.S. This is a notable difference.

The cultural disparities, such as food, music or art are different, but like between any other country in the world. Clothing is “owned” by multinational companies like Zara, Gap or luxury companies in both countries so this is not a shocking difference.

Are you looking for a cheap flight to the US or Spain (or anywhere in the world!)? Then check out Skyscanner! I’ve saved so much on airfare since I use this site as my go to flight search engine!

Leave a Reply to American in Spain Cancel reply