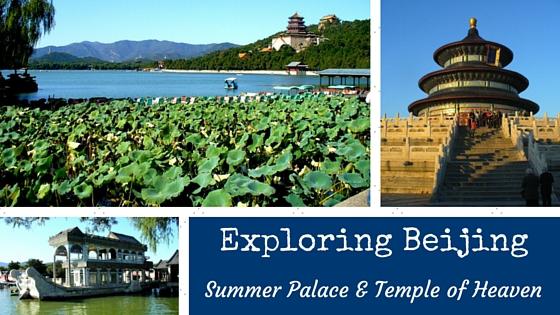 The next day, we went to the Beijing Summer Palace and actually planned to get there very early, but traffic was so bad that it took us almost 1 ½ hours to get there.  It was a beautiful day and the weather was just perfect, blue sky and not too hot or too cold.  We wandered around the gardens and along the lake and enjoyed the beauty of it all.

When we got to the Hall of Virtuous Glories, I decided to go only half way up the stairs and was waiting in the middle section.  Let Nir do the climbing, I look at the pictures!  So I sat down in the sun and enjoyed eavesdropping to a conversation between three Germans: a gay Flight Attendant and two Eye doctors, who were exchanging their knowledge about the best expat hangout spots in Beijing.  I did not disclose myself as a German, but it was quite nice to hear my mother tongue life and in action and not on a phone.  Even though I was still sitting in the same spot, Nir and I managed to miss each other…  Supposedly, he even went down the stairs right in front of me.  I really did not see him!!!  So he went all the way up, then all the way down, looking for me, then back up half way, where we happily reunited and then half way down again.  Poor guy!!!

The Beijing Summer Palace was really beautiful, and it was nice to see it in a different season than winter.  Even though I really liked it there during the wintertime, with the frozen lake and much fewer tourists, it was nice to see it lush and green, flowers blooming and birds singing in the trees.

Exploring Beijing – Acrobatic Show, or not!

For the rest of the day we had planned to see the Acrobatic Show and have a nice Beijing Duck dinner afterwards.  Nir also wanted to go to a Youth Hostel to figure out how to get to the Great Wall the next day and write some emails.  But as a German saying goes: First, it comes different, and second as you think!  (Sorry for the Germinglish, but this just fit the events of the afternoon and evening perfectly…)  I had found a theatre called The Acrobatic Theater close to the Temple of Heaven.  So we took a cab and once more, we got stuck in Beijing traffic.  After about an hour in the cab, our cab driver threw us out at what supposedly was right place to see the acrobats.  We actually managed to find an old building that showed posters of acrobats in action on the outside, but the place simply looked deserted.  Close to it, there was another theater and this one even had a ticket counter.  But when we asked the girl on duty, she only gave us a blank stare.  She did not speak a word of English and our phrase book did not contain the word for Acrobatic.  We ended up saying Acrobats in every possible pronunciation and accent and Nir even tried to imitate a Juggler, which actually looked quite funny due to the fact that he did not have anything to juggle with!  While I could not stop giggling, the girl behind the counter just continued to stare at us.  I guess she tried to figure out what kind of drugs these two strange laoweis had taken…  Despite our efforts, we ended up without tickets so we went to the Temple of Heaven instead. 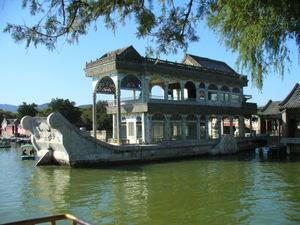 We walked through the park and ended up at the actual temple right before sunset.  Most of the tour groups had already left (probably to see the Acrobatic Show ha ha) and the light was perfect, because it made the already stunning colors of the temple even more brilliant.  We had seen on the map at the entrance that there is also an echo wall somewhere in the garden and we thought that would be fun.  Unfortunately, the little map on the back of the entrance ticket only showed the Chinese symbols, so we asked for directions.  Everybody we talked to send us in another direction and we walked all over, but never found it.  The last people we asked just send us to the wall surrounding the gardens of the temple, but at least that way we were able to find the exit.  When we finally managed to get out of there, it was already dark and the park had closed about half an hour before.

Then we headed to one of the youth hostels nearby, so Nir could figure out how to get to the Great Wall the next day!  The staff at the little travel office was really nice to us even though we were not staying at the hostel.  Unfortunately, all the tours left between 6.30 and 7.30 AM, and the chances that Nir would make it on time from my place to the south of Tiananmen Square by then were rather slim.  Luckily, the girl told us that he could go to Tiananmen Square and catch a public bus there.  As the next day was Nir’s last chance to see the Acrobatic show, he wanted to be back around 5, so he could definitely make the show at 7.15 PM.  As the most impressive and least touristy parts of the Great Wall are rather far, he decided to go to Badaling, even though it gives the impression of a theme park rather than one of the 7 wonders of the world.  We also confirmed with the girl to which theater we should go and off we went.  Across the street was a little internet bar and Nir went in to check his mails.  I went off to some little stores in the neighborhood to find some honey, because Nir was not feeling well and had a scratchy throat.  Unfortunately, all I could find was apple jam and I am not quite sure that this has the same effect, even though it looks the same. 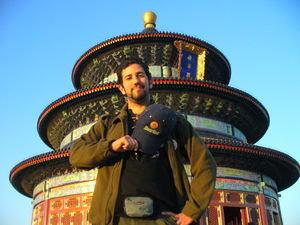 Nir’s friends had recommended a nice place to eat Beijing Duck, which was supposedly close to the hostel as well, so we asked for directions again.  In retrospect, I really don’t understand why we did not learn from our previous experiences of that day.  Of course, the girl had sent us in the wrong direction, so a 5-minute walk turned into more than half an hour.  This was no fun after a whole afternoon of getting lost, asking for directions, getting bad news and no proper food except for Chicken rings and a lamb skewer.  We did not know the name of the restaurant, so when we reached the place, we found two Beijing Duck restaurants right next to each other.  The first one looked cheap and Chinese style and the other one was in a nice hotel and rather fancy.  We asked at the cheap place if the other restaurant in the hotel serves Beijing Duck as well and the waiter told us boldly that they were closed, even though we saw many people through the windows.  After this rather discouraging afternoon and the bold lie of the waiter, we decided to splurge and went to the nice restaurant.  Our bad luck of the afternoon was gone as soon as we opened the door to the hotel.  4 beautiful Chinese girls welcomed us in English with the sentence: “Beijing Duck for two?”  No embarrassing charade necessary to get the famous duck, even though the thought of it is quite funny: Two laoweis in a fancy hotel trying to imitate ducks…  Our waiter also spoke very good English and helped us to order.  We ended up getting 1/2 duck, duck liver, cucumber, spring onions, as well as the obligatory “tortillas” and dip sauce.  The meal was absolutely delicious and our mood got better and better.  After an exciting day exploring Beijing Summer Palace, the Temple of Heaven and our other escapades, we headed home to get a good night rest.