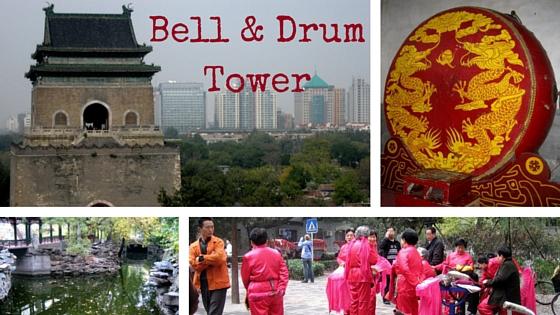 Another week at work passed much too quickly, and time is flying by. I cannot imagine that I have been here for almost 2 months already. This weekend, I went to the Bell and Drum Tower, and also found out some exciting news about my China Visa.  2 weeks ago, Nir and I went to the Visa administration office, because he had to check something about his visa. When we were there, I also used this opportunity to check about my visa.  I have a 6 month multiple entry visa and the woman told me, that I should come back in 2 weeks, bring the invitation letter from my company and it would be no problem to extend my visa.  The problem with my visa is that I can only stay in the country for 60 days on each visit, and since I actually did not plan to leave China before my trip to Germany in the end of December, I need an extension.

So this weekend, I went back to the Visa administration office, this time with the letter of my company and thought it would not be a great deal.  But when I got there, the lady told me that I had to choices, either I cancel my 6 month visa, get a new 1 month visa, have it extended twice, get another new visa while I am in Germany for Christmas and have that one extended once next year.  As I will be in Germany only for a few days, and actually did not plan on doing all sorts of administrative work while I am there, the only option for me is to leave the country before November 5, 2007.  This way, my visa will be valid until I leave for Germany, and when I return from Germany, I will have less than 60 days in China.  So, guess what, Maria goes on tour again!!!  Actually, I am so sad, that they could not extend my visa…  On Monday, I will have to talk to my boss, whether I could have a few extra days off, and then I will decide where I want to go.  As of right now, I am thinking about Cambodia, Thailand, Korea, or Macau.  Well, may be my boss is in a good mood and sponsors a flight to Sydney, so I can have a look at the Headquarters of Winglong???  Well, I will see, and I will keep you posted about it, promise.

After this eventful morning, I went to on my usual weekend sightseeing tour.  Since the famous Drum and Bell tower is very close to the Visa administration office, I had picked that as the sight of the day.  Actually, my mind was not set on sightseeing at all, I would have rather checked out some flights, but since my internet does not work at home at the moment, I occupied my mind with some more cultural intake.  The Drum and Bell Tower is north of the Forbidden City and west of the Lama temple and once you climbed the steep stairs, you have a beautiful view of the city.  Every half an hour, there is a drum performance, which was very nice.  It gave the place a very unique atmosphere, different from most museums or ancient sights, because you actually saw how the exhibits were used back in the days.

While I was enjoying the view, I saw a lake not too far from the tower, which looked strangely familiar.  When I looked it up on the map, I saw it was Hou Hai Lake, the lake Nir and I went to one night during his stay.  When I left the tower, I wanted to check out, if the lake is as beautiful during the day as during the night.  So I started to walk through some narrow streets with Hutong houses on each side.  Unfortunately, there were many, many tourists, mainly western tourists and apparently, one of the highlights of their tour was to take a rickshaw through the Hutong area.  As they were in groups of about 30 people, at least 15 Rickshaws in a row were rushing through the narrow streets and ran over everything that was not fast enough to jump.  They were having a good time, and I finally found out why they have a parking lot with about 50 rickshaws, which Nir and I saw there the last time.

I continued to walk along the river and since it was only early afternoon, all the bars were still closed and people were cleaning up the mess of the night before.  The area had a strange feeling, because it felt like after a private party, when you have to clean up before your parents come home.  I was glad to reach the end of the bar area, because I started to feel a little hangover, even though I had not been to a party the night before…

Oh yes, the night before…  I went with my friend Sabrina to a nice African restaurant.  We ate Couscous and even though it tasted great, it did not come close to Leila’s couscous, my Tunisian friend in San Diego.  After that we went to Suzy Wong’s and met up with Stefan, a nice guy from Germany (even Franconia), who is also doing an internship in Beijing.  Well, let’s put it that way, my first impression of Suzy Wong did not change, and I just don’t like the place.  Too many rich expats, who want to hook up with a Chinese beauty and too many Chinese girls trying to hook up with a rich expat…  But Sabrina and I had a good time figuring out for which of the girls you had to pay and which were there to have a good time with their friends. 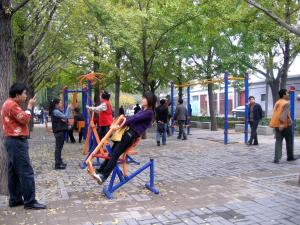 Back to Hou Hai lake…  Once I passed the bar area, the lake became much more beautiful, especially since there were no tourists anymore.  I walked around the lake and enjoyed the music of a Saxophone player, who was playing on the other side of the lake.  When I reached him, I wanted to throw a few RMB into his hat, because I enjoyed his music the whole way around the lake.  But there was no hat; he was just playing for his own joy and for the joy of all the people at Hou Hai Lake. 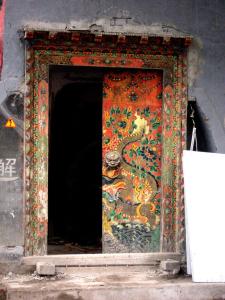 When I was half way down the other side of the lake, I found the former residence of Soong Ching Ling, the honorary Chairman of the People’s Republic of China, and the wife of Dr. Sun Yat-sen, who was a famous political activist in the first quarter of the 20th century.  The Villa contained a very interesting exhibition about the life and work of Soong Ching Ling and Sun Yat-sen, but you could also see their private rooms, as of the early 80’s.  There was also a small, but beautiful garden with a nice artificial river surrounding the house.

After having visited two interesting sights and a long walk, I went back home and finished the day off being lazy, studying some Chinese, and watching DVD…