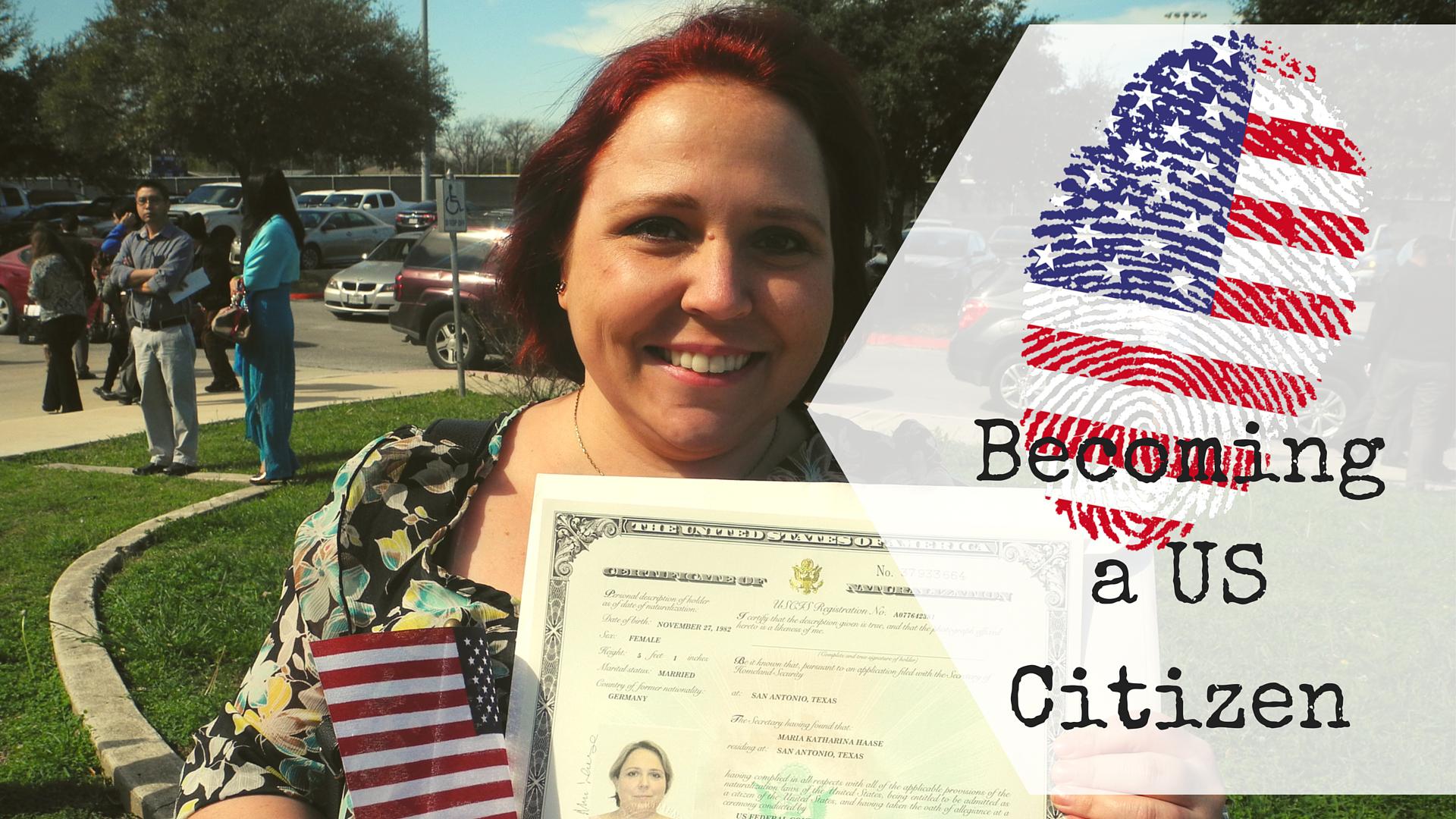 So last Friday, I became a US citizen. Finally. After 10 years in the US, first on a student visa, and then, after getting married, the infamous Green Card. The process of becoming a US citizen has been quite interesting and laborious to say the least. Filling out hundreds of form, sending in stack of pictures and documents to proof that the marriage between me and my husband is actually real and not a fake marriage, doctor’s appointments for mandatory vaccinations, several appointments to take my finger prints, an interview to check my English skills and American History/Civics knowledge and finally, the Oath Ceremony – let me put it that way: The US Government does not make it easy for you to become a legal citizen and it is also quite expensive. All in all, we paid about $ 5,000 for the whole process from Green Card to becoming a US citizen, including for hiring a lawyer during my initial Green Card application (only about $ 1,500 of the total, as we only hired one for my initial Green Card application, the rest I did myself), fees and more. Don’t get me wrong, I am all for it that a country has an orderly immigration process, but $ 3000 – 5000 is also quite a chunk of change that not everybody has.

As I sat in the audience, waiting for the judge to swear us in and finally becoming a US citizen, I was looking at all my fellow future US citizens around me. It became obvious to me that there are two kinds of people sitting there, waiting with me to become Americans. While most of us were trying to fight off the lack of sleep and coffee, looking bored as we waited in line to be processed and finalize our paperwork, some of the faces around me seemed to be glowing. Like little kids in front of a mountain of Christmas presents, they just didn’t seem to be able to contain their smile. To them, the US was the best thing since sliced bread. The land of milk and honey, where they would be safe from political instability or persecution, war and crime, where they would able to rise their standard of living significantly, live a better life themselves and maybe even make a better life possible for their families. It filled my heart to see them as they were embarking on a bright future. Yet for some of us, including me to be honest, it wasn’t quit as exciting. I am from Germany, so according to this study, I already have the most powerful passport in the world, allowing me visa free travels to 177 countries. I don’t come from a land of poverty or stricken by war or crime. For me, living in the US was a matter of personal preference at first and because of love later. Don’t get me wrong. I love the United States and it is one of the most beautiful countries I have ever set foot in. But for me, it was more of a lateral move, rather than falling up the benefits ladder.

Why did I become a US citizen?

Of course I have benefits by becoming a US citizen, that is why I went through the process and spent all that money. But for some of you, it might be surprising what those benefits are.

Yes, I can vote now in any state or federal election. I already filled out my voter registration card and will be ready to go vote in my first election here in Texas in May.

While I still can’t run for president, I can run for any other government position that I qualify for, from City council to Senator or Representative.

I can now legally stay in the United States for as long as I want and cannot be denied entrance because of even minor crimes and violations (such as speeding tickets), which is rare, but has happened to people with only a Green Card.

I now enjoy the protection of the US government. So in case I get stuck in a catastrophe, they will take care of me. At least a little bit. This is actually a huge disadvantage for dual citizens, as in case of emergency, they might tell me that the “other” country is responsible for me.

This is one of the biggest benefits for me personally. With only my Green Card, I was at the mercy of the immigration officer to let me back into the country, especially after spending extended periods of time abroad. As soon as I give up my residency here in the US and don’t have a home base here anymore, I would have to give up my Green Card and apply for it all over again, if I choose to return. As a travel blogger with the plan to move to Germany for a few years in the the near future, this was a THE main reason for me to become a US citizen.

While I am not planning on schlepping everybody and their cousin over here to the United States, I do feel good that I could bring my Dad over here when he is older and needs care. I do have 2 siblings in Germany, but you never know what happens and it is good to know that if it comes down to it, I don’t have to choose between my life in the US and taking care of my Dad.

This is something I had no idea about until recently. As a foreign spouse, I would have to pay inheritance tax on the first Dollar that I inherit from my husband, if something were to happen to him. This could only be avoided by setting up a trust or by me becoming a US citizen. Obviously this would be the least of my problems, if something were to happen to my husband, but it is good to know that now I don’t have to worry about financial things on top of everything else.

Green Cards are only valid for 10 years and to renew it or if you have to replace it in case you loose it, you have to pay a fee of over $ 400, which adds up to quite another chunk of change over a lifetime.

My husband and I are very much in love and don’t even have kids yet, so this is a bit far fetched. However, it is good to know that I now would have better chances to get at least partial custody of our future children, if we ever…  I don’t even want to think about this!!!

Many scholarships are restricted to US citizens, but some are for foreign citizens, so in this case I am lucky. Maybe I should go for that Doctorate Degree that I have been dreaming about all those years?

As a small business owner, I am grateful for any support I can get. That includes subsidies and support from the government, for which I can now apply if I choose to.

Not sure if I want to do that now, but a few years ago, I was very interested in this and it irked me very much, that I didn’t qualify as “only” a permanent resident.

Especially jobs in the US Government and the Military are often restricted to US citizens and I can now apply for those positions.

Some thoughts on Dual Citizenship 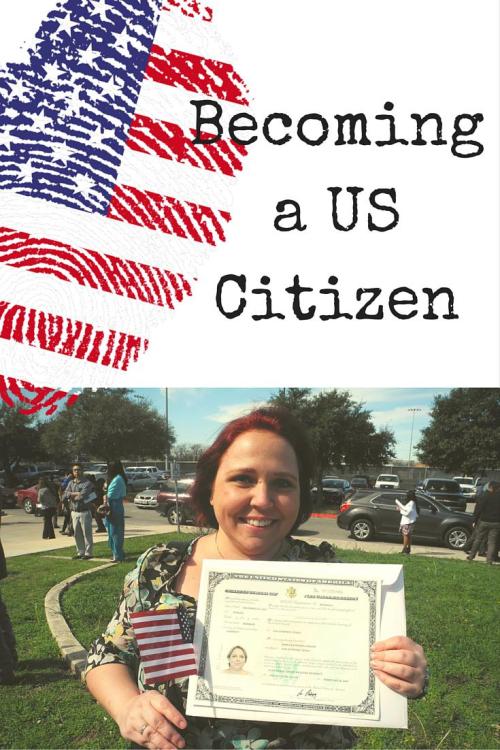 “Hello, my name is Jason Bourne.” Soon, I’ll have two passports and can pretend I am some sort of master spy. I feel very lucky that I was able to keep my German citizenship, so now I can live not only in the United States, but also in Europe. I know how privileged this makes me and I am very grateful for it. It also feels a bit schizophrenic and I haven’t quite made up my mind on how I will act in certain situations. If someone asks me where I am from, will I say the US or Germany? It will probably turn into something like: “Do you really want to know? Well, then pull up a chair and get a coffee….”

Another questions I’ll have to think about and make a personal decision on is, whether I will vote in both countries, even if I just live in one. Even though I was very interested and involved in German politics before I moved here, I decided not to vote there. It just didn’t feel right to vote in a country I didn’t live in. But now that I can move freely between both places, maybe I will vote.

I also admire the people that gave up their citizenship. I don’t think I would have considered becoming a US citizen, if I had to give up my German citizenship. I am German and I always will be German. I will cheer for the German soccer team, not the US team. I will always see Germany as my home. I am very happy that I can now move back and forth between the two continents, visit my family back in Germany for as long as I want to and one day, when I have kids, allow them to grow up and experience both cultures (and hopefully many more).

I also feel that now it is official that I am torn between two countries. In German, we have a saying that you “sit between two chairs” and this is how I always felt about my relationship between me and “my US” and “my Germany”. A triangle love relationship at its best. I am too German to fit in in the US and I am too American to be a typical German. I have lived close to 1/3 of my life in the US and I feel I am part of both cultures, but not really. Becoming a US citizen and having two passports now gives my feelings some validity and puts me in the category with my fellow Third Culture Kids.

Do I feel any different after becoming a US citizen?

It is a bit like when you were a kid and Uncle Joe asked you if you felt any different now that you are 14 compared to yesterday, when you were 13. It hasn’t really sunk in yet. Am I American because I have a piece of paper now (and soon a passport)? Officially I am, of course, but I still don’t feel any different. Becoming a US citizen was still a very emotional process, though. I even shed a tear or two, as I stood and said the pledge of allegiance and listened to the brass band play the Star Spangled Banner. It was also the first time that putting my hand over my heart felt right and not just like an empty gesture. The United States is my country now too and I feel proud to be a US citizen.