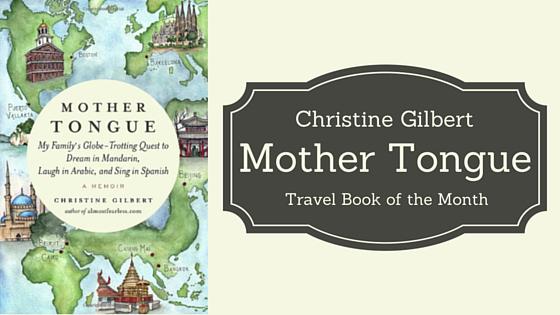 Mother Tongue: My Family’s Globe-Trotting Quest to Dream in Mandarin, Laugh in Arabic, and Sing in Spanish

by Christine Gilbert is a travel memoir that focuses on language learning through immersion. The Gilbert Family embarks on an quest to learn the three most wildly spoken languages in the world: Chinese in Beijing, Arabic in Beirut and Spanish on the Mexican Riviera. As  the young family had lived a nomadic lifestyle before, they had never focused on learning the languages of the places they visited. After weeks of preparation and research about how languages are learned and even finding studies that suggest medical benefits for multi-linguals.

Since Mandarin Chinese is the widest spoken (first) language in the world, Christine decides to start their journey in Beijing, China to learn Mandarin Chinese. As soon as Christine and Drew, as well as their toddler Cole arrive in China, they are hit hard by culture shock, the climate of wintery Beijing and the high pollution that prevents them from exploring the city and meeting others. Nonetheless, Christine dives into an intensive study regiment, Chinese lessons and even hires a nanny/maid who only speaks Chinese. After weeks painstakingly slow progress on the language learning front, a hermit-like existence without contact to anybody other than their nanny and a few language tutors, their frustration peaks when their cultural expectations clash with those of their nanny. Within two days, they pack up and leave the country, heading back to Thailand to plot their next move.

On their second stop, they head to Beirut, Lebanon, so Christine can learn Arabic and their son Cole can be exposed to another foreign language. They instantly fall in love with the multicultural city, the food, the mix of languages that surround them and the mild climate of the Mediterranean. While they still struggle with the standard of living, almost daily power outages and the politically unstable situation in the Middle East, they start to feel at home in Beirut. Christine is also very content with her progress in her Arabic studies and all seems well. Christine discovers that she is pregnant and they are looking forward to settling into their life in the Middle East. Unfortunately, things take a turn for the worse, when the political situation takes a turn for the worse and they decide to flee the country as it wasn’t safe for their family any longer. 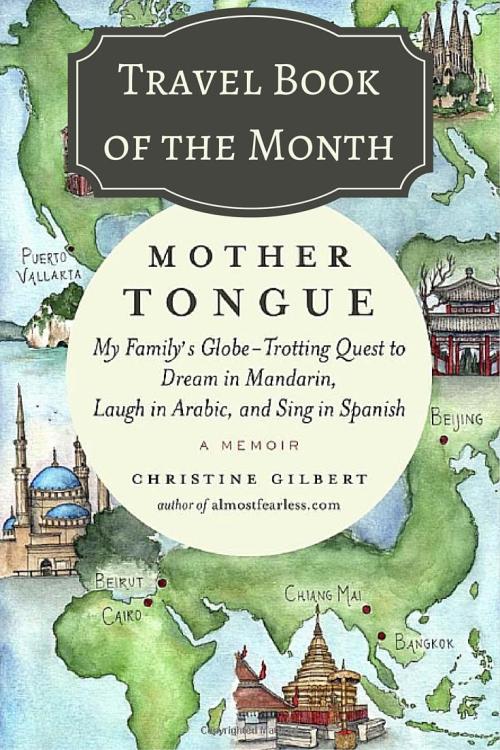 The Gilbert’s next stop of their language journey is Puerto Vallerta, this time, yes, you guessed it, to learn Spanish. They find a nice house amidst locals, yet close to a thriving Expat community. Christine jumps right into learning the language and rather quickly develops a colloquial fluency. Even her husband Drew and toddler Cole pick up the language. As they immerse themselves into the culture and language, they prepare for the birth of their second child and truly settle down. But their nomadic hearts were still restless. After the birth of their baby girl, they break up their tents again to move to Barcelona.

The book Mother Tongue ends with a short glimpse into their fourth and last stop (in the book, at least): Barcelona, Spain. Christine and Drew had fallen in love with the city years before, when they had spent their honeymoon there. Is this the place where they will settle down and raise their kids?

What I Love About the Book Mother Tongue

I love Christine’s enthusiasm about raising her children in a bilingual setting, especially since she and her husband never learned a foreign language. I find it very admirable that she is on a quest to open the world for her children like that, to make it easier for them to feel at home in as many places as possible and teaching them about different cultures.

The other thing that I truly love about Mother Tongue

is Christine’s honesty about the things that didn’t work out. Their first two stops don’t work out for them due to various reasons but Christine does not try to sugar coat it.

Pick a foreign language, because you love the country and its culture, not because you think it might be a strategic language to learn, so you can get a better job or because so many people speak it. Christine says: “In a way this was part of my language education. I knew now that it was not enough to just study out of an book, to perfect your accent, or to write endless essays. You have to fall a little in love with the culture, to learn it.”

I absolutely agree with Christine’s point in Mother Tongue. I grew up in Germany and my family had a strong connection to the US, as we traveled here every year. As a child and teenager, I spent every summer in the US and fell in love with the country and its people. When I started to study English in School in 7th grade, something funny happened: I never had to study. I picked up the vocabulary and grammar as if I already knew it. Within a few months, I was reading thick John Grisham novels in English. Then in 9th grade, I started to learn French in school and guess what: I studied and studied and nothing stuck. I had never been to France and didn’t know anyone from there and therefore I had 0 interest in learning the language. I had to take French for 3 years in High School, as well as English for 6 years and Latin for 8. (Yes, we take foreign languages very seriously in Germany.) And while my English grades were usually straight A’s (I did have a few teachers that did not appreciate it, when I corrected them :)), but in French and Latin, I was scraping by with C’s and D’s. So if you are thinking about learning a foreign language, pick the one that your heart chooses.