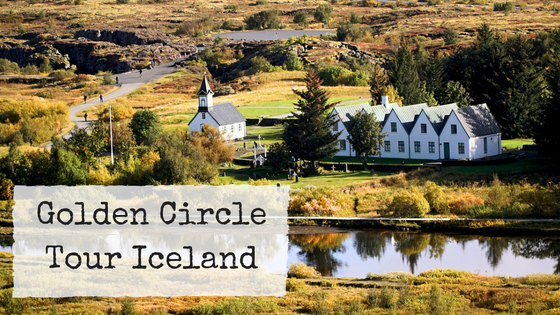 Iceland. The country, where roads are planned to not disturb fairy settlements and the moss-covered lava stones look like the cute trolls in the movie Frozen. I love this place, its stories, and sagas. The harsh climate and rugged landscape. The people, who are down to earth, but believe in trolls and fairies at the same time.

While I only got to spend 6 days in this magical country, I knew instantly, that this wouldn’t be my last visit. Within 24 hours, the husband and I started planning future trips to Iceland. If you want to get a taste of the Golden Circle Tour in Iceland, check out the video below!

Here is some great ideas for your Iceland itinerary.

How to get to Iceland

We decided to extend our layover in Reykjavik to Germany and found incredible cheap tickets with WOW Air, which are now unfortunately out of business. They (and some other airlines) have great prices and make a trip from the US/Europe to Iceland quite affordable. You can also do a stopover in Iceland on your way to the US or Europe like we did. Check out Skyscanner for comparison and finding the cheapest tickets. Find cheap flights and book today with Skyscanner.

Since we only had a few days, we wanted to make the most of it and see as much of Iceland as possible. Usually, the husband and I are not «organized tour tourists» and prefer to explore on our own. But with limited time, we booked two tours packages to show us around: the Golden Circle Tour and the Snæfellsness Peninsula Tour with Golden Tours. We had a great time on both tours and then rented a camper van to explore the Southern shore on our own for a few days. A perfect combination that worked very well for us. If we could do it again, we’d book a nice and cozy AirBnB for the first couple of days in Reykjavik and then head out in the campervan. A big shout out to Golden Tours and thank you for inviting the husband and I to come on these two tours.

But let me tell you a bit more about the Golden Circle Tour with Golden Tours and why I think it was our best option to see the sights.

Golden Circle Tour – Yes, it’s touristy, but it is a must!

The Golden Circle Tour is the quintessential Iceland experience. If you only have a day or two in Iceland during a quick stop over, the Golden Circle is the obvious choice, because you get to see some of the most iconic sights of Iceland. And that is why it is so popular with tourists. Pretty much everyone who visits Iceland does the Golden Circle Tour. It’s kinda like going up the Empire State Building, when you are in New York or going to see the Mona Lisa, when you are in Paris. You gotta do it at least once, right?

Since you’ll be visiting places that are flooded with tourists anyway, you might as well take a bus there and don’t have to worry about parking, plotting a course and renting a car. You’ll be picked up/dropped off at your hotel or AirBnB (since we stayed at a campground on the outskirts of Reykjavik, we drove to the bus terminal and were picked up there). Very convenient.

The first stop on our Golden Circle Tour was Thingvellir, aka the Parliament Plains. This is a beautiful spot that used to function as a meeting place of the clan chieftains of the Icelandic Commonwealth. This was the place, where disputes were settled and laws were passed to make life more peaceful and organized. 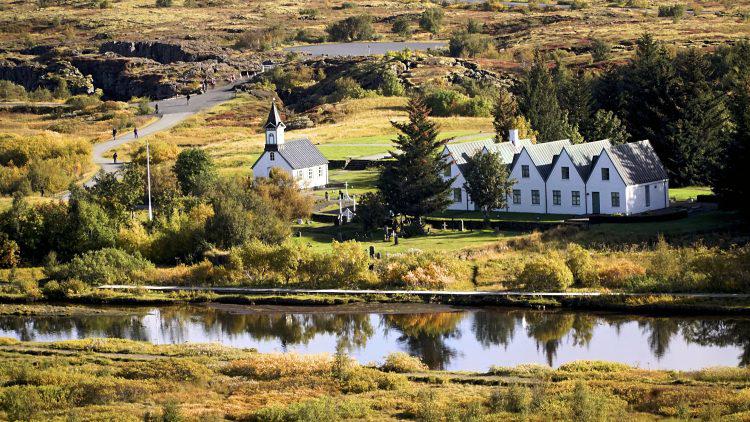 Thingvellir is also located, where the European and American continental plates collide and you can book a snorkeling/scuba diving experience in one of the water-filled canyons and the lake. Definitely a bucket list item for many (including myself) and it is on the top of my list for a future visit. 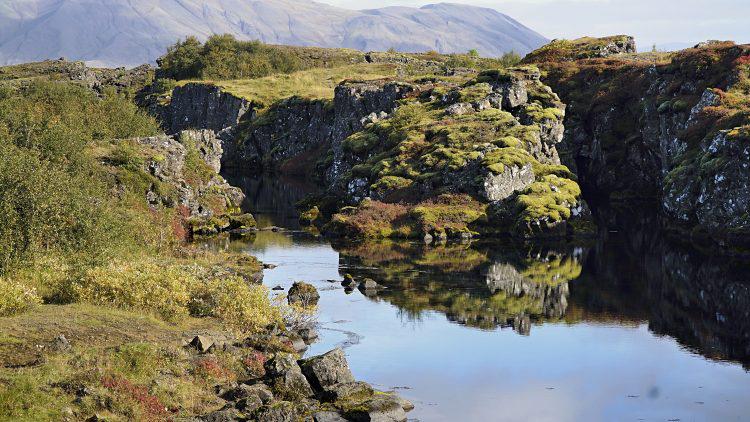 Our bus driver told us a bit about the history and importance of the site during our 1-hour drive from Reykjavik. He let us out at the parking lot overlooking the cliff and picked us up 45 minutes later at the lower parking lot. We had enough time to stroll around, take pictures and enjoy the beautiful sunny morning. 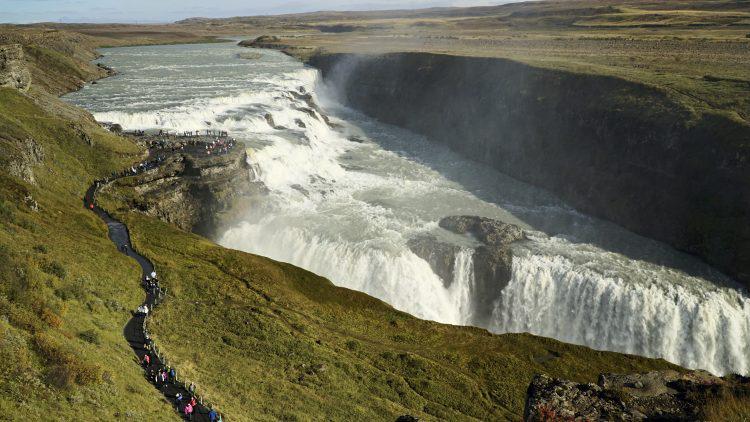 Next up was the most picturesque stop on the Golden Circle Tour: Gullfoss waterfall. Iceland is the land of waterfalls. The vast glaciers in the mountainous center of the island feed the streams and rivers year round. Foss means waterfall in Icelandic and when you look at a map of Iceland, you’ll find hundreds of places ending in foss. 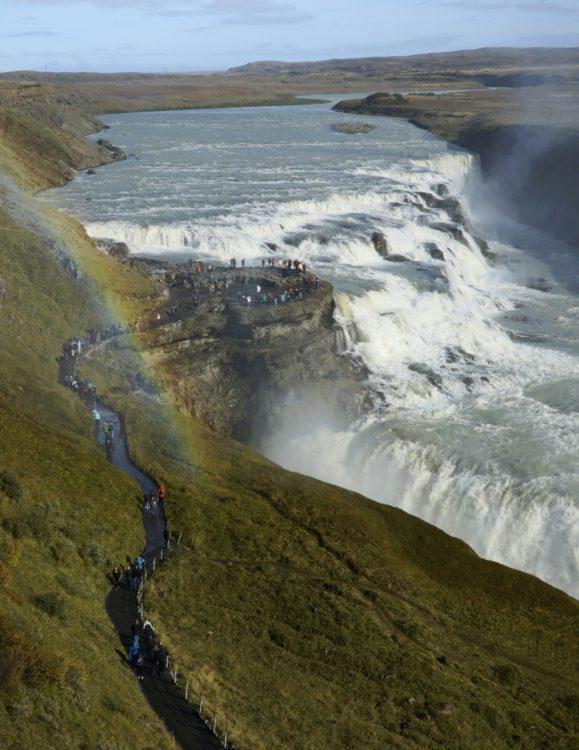 Gullfoss is definitely one of the most picturesque waterfalls. We arrived there in mid-day and it was pretty crowded. There is also a nice gift shop and a cafeteria style restaurant. Try their all-you-can-eat lamb stew. It was really delish and the husband and I both had seconds.

After lunch, we walked down the hill towards the waterfall. The sun was shining and we saw a beautiful rainbow over the fall. The mist was hitting us pretty bad, so if you have a camera, bring a dry bag to keep it safe. A rain coat is also a good idea.

The husband and I enjoyed the view, took pictures and had a good time. Next time, I want to come for sunset/sunrise to take some more epic pictures, and hopefully enjoy this place without the crowds.

Geysir is not any old water spouting Geyser, it is THE GEYSER that all the other Geysers are named after. I had no idea!

Our stop at the Geothermal valley of Haukadalur was absolutely fascinating. Yes, there are tons of tourists as well. But I find it so amazing to see our Earth’s workings with my own eyes. This place really has some prehistoric feel to it. Like, you wouldn’t be surprised, if all of a sudden some Stegosaurus came strolling around the corner Jurassic Park style. 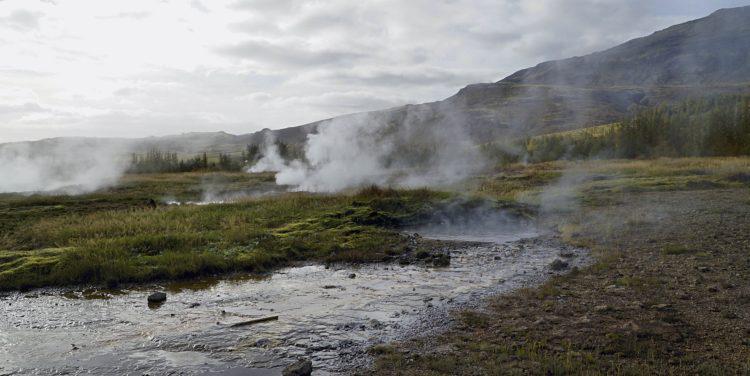 The smaller, yet still impressive Geyser Strokkur erupts approximately every 5-7 minutes and shoots up 60-100 feet (18-30 meters).

Geysir, the larger of the two main Geysers in Haukadalur, has been dormant since the 1930s, but is believed to have spouted its water over 80 meters (260 feet) high. 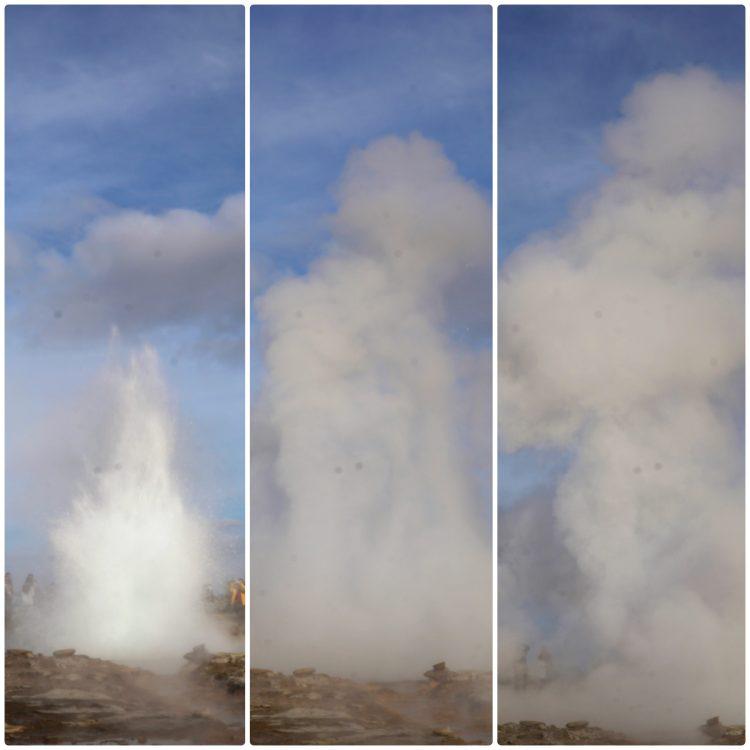 Warning: Make sure that you are keeping an eye on wind direction, as the spray of the geyser can soak you if you stay too close. Also, please stay on the walking path, because you don’t want to end up like the guy that fell into a hot, acidic pool in Yellowstone and dissolved.

Most tourists visit the Blue Lagoon when they come to Iceland. But on our way back to Reykjavik, we stopped by an alternative thermal bath, the Secret Lagoon. The thermal baths in Iceland are supposed to have healing properties and enjoying a dip in the many hot water lagoons is a favorite past time of many Icelanders.

The Secret Lagoon is not quite as big and beautiful as the Blue Lagoon, but it is also a bit more off the beaten path. You get to meet a few locals that visit the Secret Lagoon regularly and see how much this activity is part of everyday life in Iceland.

Tip: Swimming in the mineral-rich waters will dehydrate you, so remember to drink a lot after you leave. I drank 3 large glasses of water and still got a major headache that night, most likely because of dehydration. 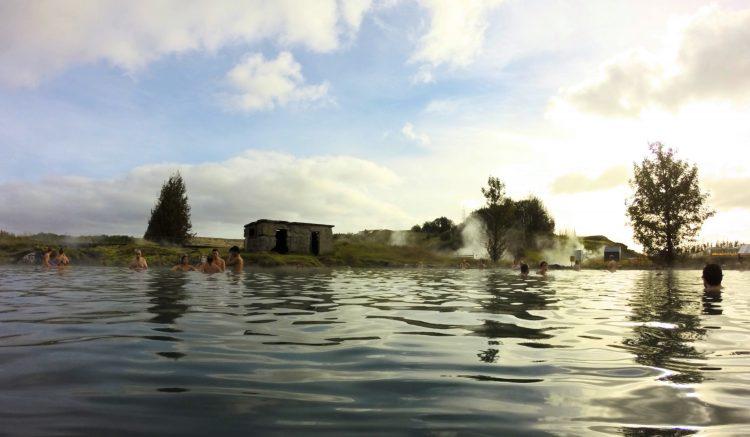 The Good – The Bad – The Ugly: Why you should go with Golden Tours

Why I chose Golden Tours:

Small Groups: Instead of being hauled around the Golden Circle in a big bus seating 55+ people, we drove in a small van seating 20, including driver. This made for a much nicer and more familiar atmosphere.

Guide: We had a great guide and instead of bombarding us with boring dates and historical details, he told us about the way Icelanders tick. As a Norwegian immigrant himself, he had an interesting outside perspective and his stories about life in Iceland were really interesting.

Long Stops: At each stop, the driver dropped us off and we were free to explore on our own. This gave it a bit more of an individualistic feel and we could spend more time on the things that interested us the most. The Golden Tours Golden Circle Tour is longer than most other tours and we often saw other tour groups hop out, take a few pictures and hop back on the bus. I know that I would have felt rushed and wouldn’t have enjoyed it as much.

Would we recommend the Golden Circle Tour with Golden Tours?

All in all, we had a really great time on our Golden Tours Golden Circle Tour. So much so, that the husband and I signed up for another one of their tours the next day. I’ll tell you more about my Snæfellsness Tour next week 🙂

If you are in Iceland, only have a short time or don’t want to bother renting a car/don’t want to drive on icy roads, I highly recommend Golden Tours. The husband and I really enjoyed the two tours we did with them. 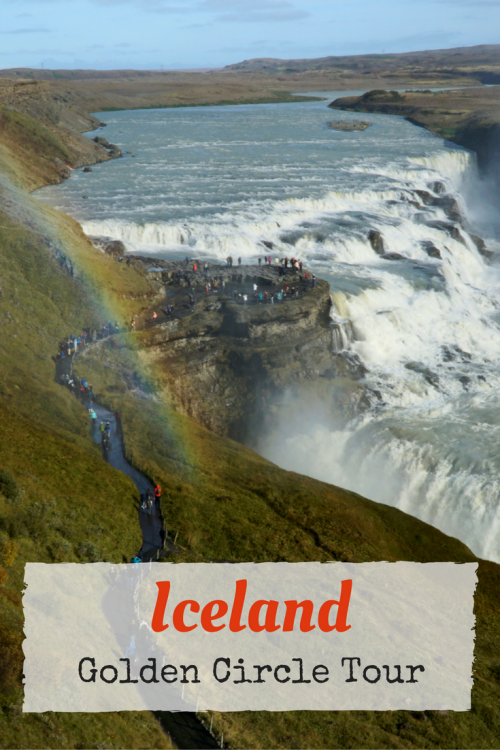 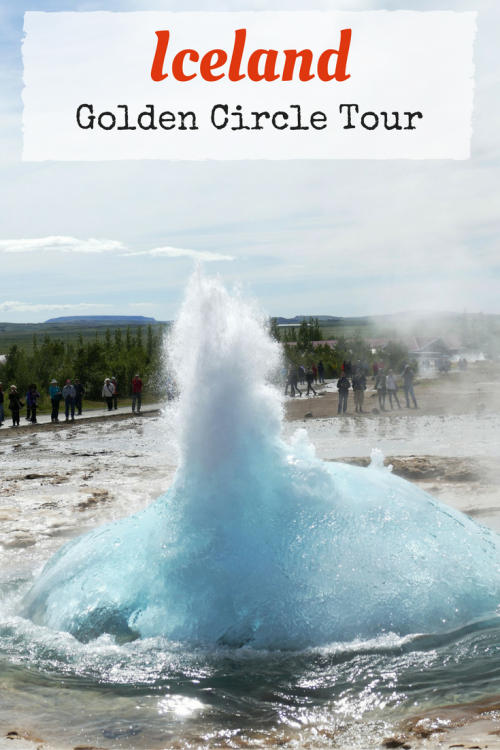