by MariaAbroad | This Post May Contain Affiliate Links, Travel | 20 comments 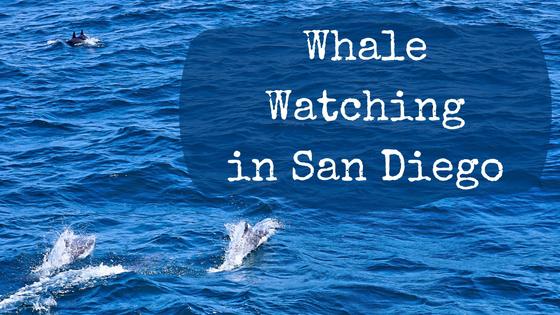 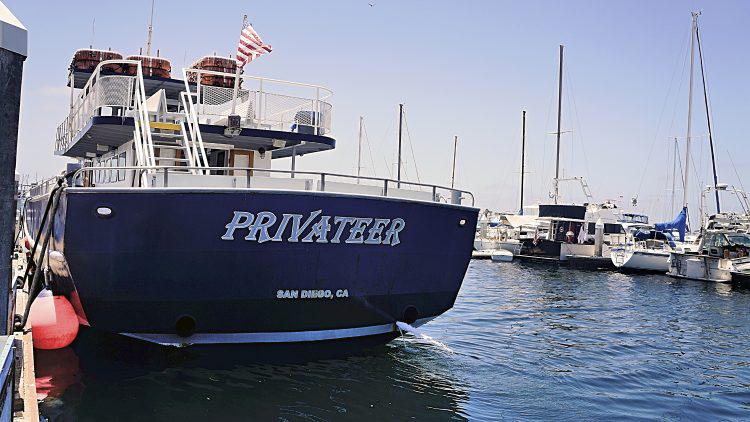 Since the husband had to work that day (yay for remote work, though!), I took the mother-in-law along on the whale watching tour and we both had an absolutely wonderful time. Our tour was scheduled for 10 AM (as per suggestion of the owner and the higher chance of seeing whales in the first part of the day). In the FAQs on their website, it says that passengers are supposed to check in 45 minutes prior to departure, but when we got to the pier in Mission Beach, there wasn’t anybody there yet. We checked in at the Fishing supply store and then had about 1 hour to kill. Yes, I know, I am German, so I have to be there earlier than everybody else.

As we both hadn’t eaten yet and were in desperate need of some coffee, my lovely mother-in-law Priscilla offered to invite me to breakfast. There was a coffee shop right there off the dock, so we enjoyed a nice cup of joe and watched the other Whale Watching passengers trickle in. I had a huge bowl of granola that could have fed a whole family. Just the right thing to start the day! 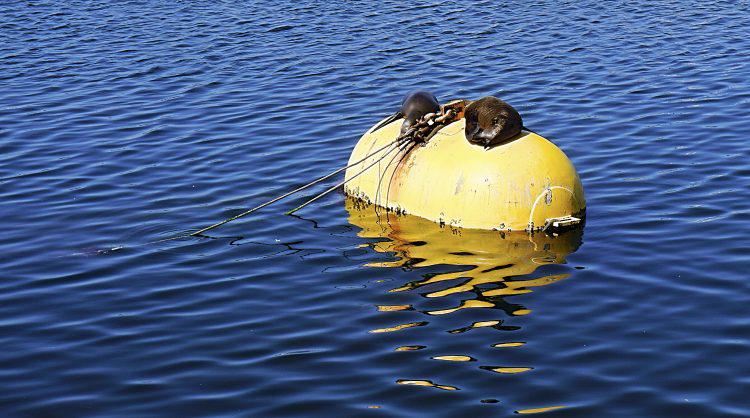 At 9.45 AM, we got on board and headed out on the ocean on our boat the Privateer. Our guide and nature expert told us that the sea was rather choppy out there and recommend that we take medication for Seasickness. I have never had problems with sea sickness and neither did my mother-in-law, so we decided to risk it. The thing with seasickness medication is that it is best if you take it BEFORE you get on the boat. Once you start getting sick, there is usually no remedy until you have solid ground under your feet again. So, if you have a history of seasickness or have experienced other forms motion sickness, better be safe than sorry and take something beforehand.

I have to admit that at first, I didn’t believe our guide. The waters in Mission Beach were really smooth and there was only a hint of a breeze. Boy was I wrong. It WAS pretty choppy and quite a few people got sick. Luckily, we sat up on top, which is usually the worst place to be on a boat during rough seas. But at least we weren’t around the people with bags 😉 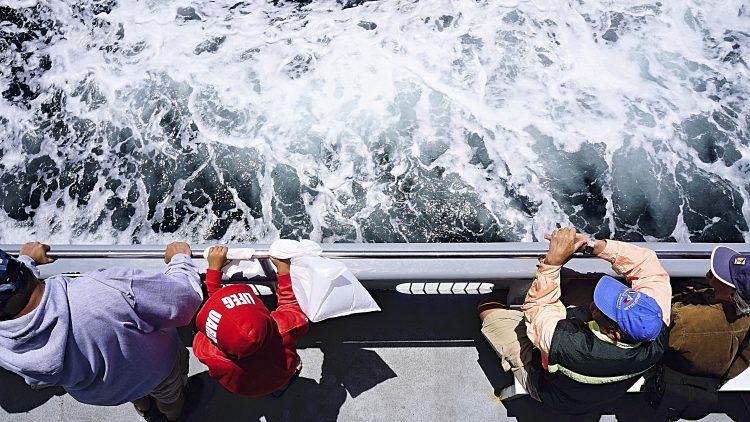 Are we going to see whales and dolphins? Of course, we hoped to see the iconic fins and majestic splashes of water as these majestic giants travel up and down the coast. About 30 minutes in, we had our first burst of excitement. A large pod of dolphins started following our boat. They were jumping and playing and it was so cool to watch them in their natural habitat.

We continued our way out and headed for an area, where the sea floor drops several hundred feet into an abyss. This geological formation makes the plankton rise to the surface and the whales follow the food and come up as well. The day before, the tour saw a huge blue whale just in that area. We did not, unfortunately. But on the way back, we were consoled with yet another large pod of dolphins and so we had a beautiful day on the water and saw some amazing animals in the wild. 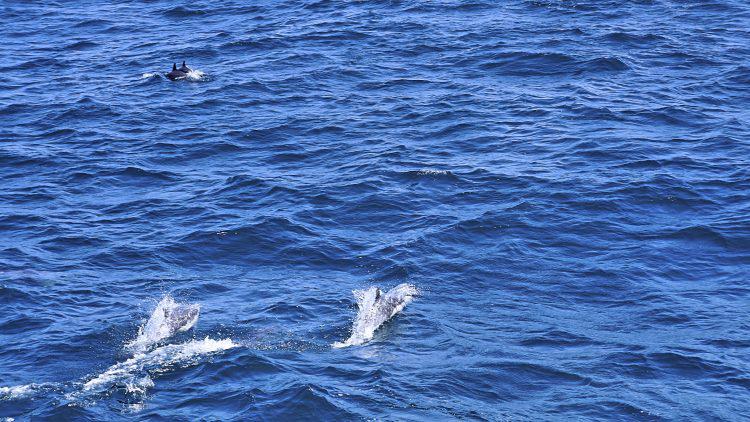 The dolphins we saw were common dolphins. Their white bellies give them away pretty easily. They travel in large families, called pods, sometimes several hundred animals strong. This pod followed our boat for quite a while and they jumped and played as if to show off their abilities. Dolphins are such amazing creatures and seeing them in the wild, watching their playful nature is really something special, don’t you think? 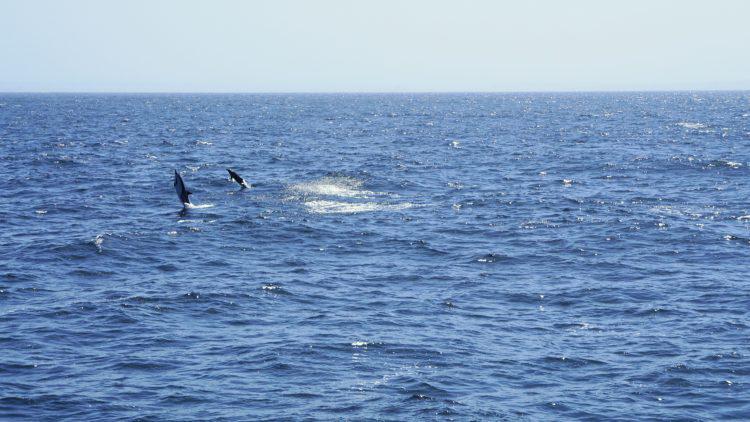 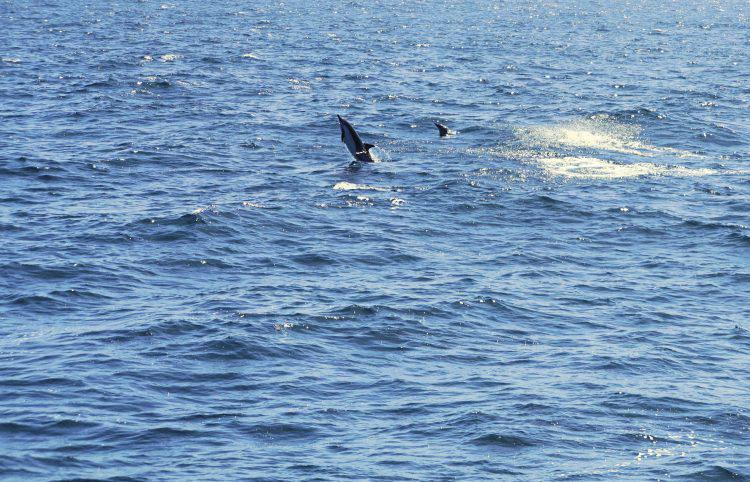 Grey whale season in San Diego is usually from December to January for their southward journey and March to April on their way back north. The highest concentration of Grey Whales passing by the shores of San Diego is usually around Mid January, where up to 8 animals pass through the area per hour.

If you are visiting San Diego in the summer, you can still have a chance of seeing whales when you go whale watching. Blue whale season in San Diego is usually from Mid-June to September. The San Diego area is a popular feeding spot for blue whales and supposedly the pod that feeds off the California coast is 2-3000 animals strong.

While most Humpback Whales travel from Alaska to Hawaii, a pod of about 2-3000 animals makes their way to the Southern California Coast to escape the winter months.

So how was my tour with San Diego Whale Watch? Well, unfortunately, we didn’t see any whales, only dolphins. But if you want a guarantee to see whales in San Diego, you need to go to SeaWorld. San Diego Whale Watch did a great job hosting us on their boat and taking us out for a fun day. My mother-in-law and I had a wonderful day enjoying the beautiful weather and our time on the ocean.

But do you know what is best of all about San Diego Whale Watch? Because we didn’t see any whales, they offered us a free ticket voucher to go back out there with them again. This voucher does not expire and was just handed to us as we got off the boat. Pretty cool, hm? I especially like the part that they vouchers never expire. So in case you saved your Whale Watching adventure for your last day in San Diego, you can save it for your next time in this beautiful city. Or it could just give you another excuse to come back and explore SoCal a bit more 😉

Have you been whale watching in San Diego or anywhere else in the world? 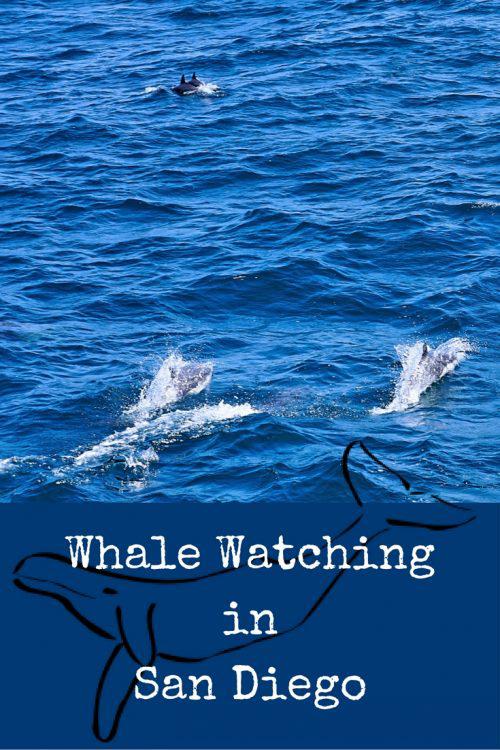